[Video] Joe Biden didn't like this question... - The Horn News 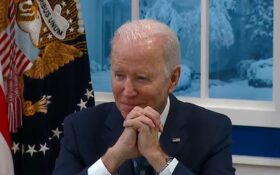 Some Americans are wondering where the tests are… but Biden doesn’t want to answer that question.

On Monday, a reporter asked Biden about a timeline. Biden remained silent and stared into space.

REPORTER: “When will Americans get those free COVID tests, sir?”

The reporter was referring to Biden’s remark from Dec. 21.

Biden said at a press briefing:

We also need to do better with at-home testing. So, I’m announcing today: The federal government will purchase one half billion — that’s not million; billion with a “B” — additional at-home rapid tests, with deliveries starting in January.

We’ll be getting these tests to Americans for free. And we’ll have websites where you can get them delivered to your home.

We have arranged for it to be easier for you to find a free COVID testing site near you on Google. Just enter “COVID test near me” in the Google search bar and you can find a number of different locations nearby where you can get tested.

And we’re going to continue to use the Defense Production Act as we did earlier this month to make sure we’re producing as many tests and as quickly as possible.

The bottom line is it’s a lot better than it was, but we’re taking even more steps to make it easier to get tested and get tested for free.

Sure enough, the Defense Department has announced a contract to ramp up production of test materials, according to a press release from Dec. 29.

However, the White House has provided only minimal updates on the timeline.

The first deliveries for manufacturers will start January. We’ll set up a free and easy system, including a new website to get these tests out to Americans. We’re actively working to finalize that distribution mechanism, which includes a website where people will be able to order tests for free. And we’ll share more details in the weeks ahead — days and weeks ahead.

As of Tuesday, the White House has yet to elaborate on the website’s launch date.

Biden is still waiting, despite the current crisis of testing.

In the last week, many drugstores have sold out of the at-home tests. Other never got their shipments. Omicron is still surging.

Plus, Biden was warned about the test shortage on a Zoom call from Oct. 22, according to a shocking report obtained by Vanity Fair.

In October, Biden’s advisors told him to mail 732 million tests to the American people, and he waited more than a month.

The at-home tests usually cost about $12, as of Tuesday. The FDA has approved 13 brands of at-home tests — not to be confused with the home-collection tests, which require a lab technician and cost significantly more money.

In other words, average citizens are still paying for the tests up front, despite Biden’s promises.

While the federal government pours even more time into the website, the states have already rushed to fill the void. Some states are requiring insurance companies to cover the testing.

By Jan. 15, the federal government may require the same from insurance companies nationwide, according to a White House press release from last month. For those without insurance, the White House plans to establish pickup locations for at-home tests.

If we ever finally see the website, then let’s hope that it doesn’t end up like the HealthCare.gov.