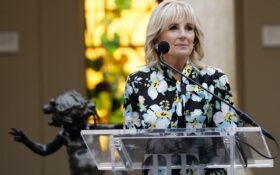 On Wednesday, First Lady Dr. Jill Biden announced a White House plan to address the teacher shortage, in her first public appearance since recovering from COVID-19.

But the first lady crashed and burned, critics said. She changed the subject after facing a predictable question.

One reporter asked, “How does the president’s student loan forgiveness program help bring down the cost of higher education?”

The first lady responded, “Well, he said he was going to have loan forgiveness during the campaign. I heard him say it over and over again, and he followed up on his promise and kept true to it.”

Twitter users expressed their frustration with the first lady’s response. “They honestly don’t even understand the issue,” one user said.

A reporter asks Jill Biden how the President's student loan forgiveness program helps bring down the cost of higher education:

"Well, he said he was going to have loan forgiveness during the campaign … and he followed up on his promise and kept true to it." pic.twitter.com/9Q47OHt7DQ

The president’s payoff plan has earned criticism for omitting any long-term efforts to lower tuition costs at public universities that would address the debt crisis. Instead, the debt plan makes only short-term proposals about loan forgiveness and medium-term changes to procedures for debt collection.

After releasing the debt plan, President Biden faced this exact criticism from both the editorial boards of both the conservative Wall Street Journal and the liberal Washington Post.

“President Biden on Wednesday lamented soaring college costs to justify his sweeping student loan cancellation,” the Journal editors wrote. “Students, he feels your pain. Yet he fails to recognize that the root causes of high costs are federal-loan and student-aid subsidies.”

“Wiping out debt now will only encourage students to take out still-bigger loans in the future, reducing incentives for colleges to hold down tuition costs — thus, in all likelihood, making higher education even less accessible for the middle class,” the Post editors agreed.

The first lady seemed uncomfortable with student debt forgiveness, according to a shocking scoop from The New York Times.

“The first lady was uncomfortable, too, people close to her said. A college professor, Jill Biden had been vocal about her husband’s call for free community college. But she did not publicly endorse forgiving student debt,” the Times reported.

President Biden appeared briefly at the first lady’s event Wednesday to joke, “Whatever she says, I agree with.”

.@FLOTUS talks about supporting, properly compensating teachers in her first public event since recovering from covid-19. @POTUS popped his head in, said “whatever she says, I agree with” and left pic.twitter.com/Wp805tMQRJ

Joe Biden walks in on First Lady Jill Biden's meeting with Secs. Walsh and Cardona: "Whatever she says, I agree with."pic.twitter.com/xoqNseJOAK