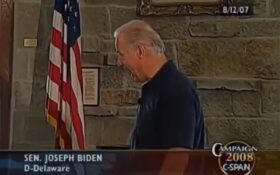 A old video of President Joe Biden resurfaced this week, and it’s capturing the attention of the G.O.P.

The video comes from 2007, when Biden was serving as a U.S. senator and campaigning for president.

Biden was speaking at a town hall in Iowa, and he spoke about Afghanistan. Specifically, he warned against leaving the weapons behind after withdrawing.

“It will take a year to get the American troops out,” Biden said in the video.

“If you leave all the equipment behind, you might be able to do it in seven month, and, you leave those billions of dollars of weapons behind, I promise you they’re going to be used against your grandchild and mine someday.”

The video was first tweeted by state Sen. Melissa Melendez, R-Calif. It gained wider attention after a retweet from radio host Glenn Beck.

Melendez is right. The video is definitely interesting… in light of President Biden’s recent decision to leave American weapons in Afghanistan.

The Military Balance, a journal for the Institute of Strategic Studies, estimated last year that the U.S. was leaving behind 180 aircrafts and 775 artillery pieces.

It remains unclear how advanced these weapons were, how many of them fell into the hands of the Taliban, or whether the Taliban’s allies are interested in buying them.

Biden supporters have argued that the video was filmed before the peace agreement between the Taliban and former President Donald Trump.

According to the text of the peace deal, the Taliban shall deny travel permits for foreign threats to American national security, prevent these security threats from fundraising in Afghanistan, discourage Taliban members from cooperating with them, and prohibit anyone from using Afghan soil to launch an attack on the U.S.

He credited the deal for keeping Americans safe from the Taliban during withdrawal. He said at a press conference in August, “The commitment was made by President Trump. ‘I will be out May 1st. In the meantime, you agree not to attack any Americans.’ That is the deal. That’s why no American was attacked.” Granted, several Americans died in an attack on the Kabul airport, but they died at the hands of the Islamic State, a sworn enemy of the Taliban.

Certainly, if the Taliban follows the deal, then the weapons will pose a lesser risk to our country… or to Biden’s grandchildren.

However, the deal has received bipartisan criticism for being unenforceable. On Twitter, former United Nations Ambassador Nikki Haley slammed our commander in chief for “dealing with the devil.” Meanwhile a liberal columnist for The Washington Post wrote, “The peace agreement came with no enforcement mechanism for the Taliban to keep its word.”

Put simply, Biden failed to take his own advice in withdrawing from Afghanistan.