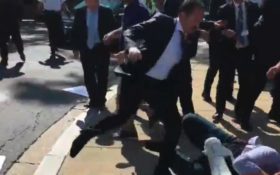 While President Donald Trump was meeting with Turkish dictator Recep Tayyip Erdogan in Washington, D.C. on Wednesday to work on a plan to defeat the Islamic State, Erdogan’s bodyguards were viciously beating a group of protesters.

These protesters were American citizens. They were peaceful. They were on U.S. soil exercising their rights to free speech.

And they were viciously assaulted for it by a foreign paramilitary unit.

Erdogan’s thugs — his so-called “bodyguards” — must think they can do anything they want while guests in our country!

It’s no surprise, of course. Erdogan’s bodyguards did the same thing when former President Barack Obama tried to work with Turkey last year — and Obama didn’t say anything about it!

Earlier this month, Erdogan was reportedly furious with Trump over the U.S. decision to arm Syrian Kurds to help the fight against ISIS.

For years, the Kurds in northern Iraq and Syria have been the United States greatest ally in the fight against the Islamic State and radical Islamic terrorism.

Turkey considers the Kurds in Syria to be their enemies, and has bombed both them and ISIS. Now, they’re bringing the fight to American soil.

So while Erdogan was smiling with the president and promising cooperation, his thugs were outside pushing around U.S. cops and beating American citizens of Kurdish descent.

Only two people were reportedly arrested following the bloody melee, and there’s been speculation that Erdogan’s thugs have diplomatic immunity.

Warning: The following video of these jack-booted thugs ganging up and assaulting U.S. citizens may be upsetting.

Footage of Turkish security raiding against Kurdish-Americans in front of the @TurkishEmbassy in DC. So disturbing. pic.twitter.com/5WYtDzDs5O