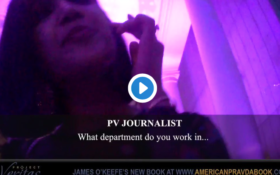 President Donald Trump is being politically targeted by the media — and undercover footage of a top Twitter administrator confirmed the bias against the president and his supporters is intentional.

In the video, an undercover Project Veritas journalist can be seen speaking with Olinda Hassan, Policy Manager for Twitter Trust and Safety.

“I’m in a controversial team,” Hassan says. “I’m the team that everyone says a lot about.”

The undercover journalist says she’s having trouble blocking conservatives from showing up on her social media, even as far as blocking and muting them.

And Hassan responds, confirming Twitter is actively trying to solve how to silence these conservatives. ‘That’s something we’re working on,” she said.

“We’re trying to get all the shitty people not to show up [on Twitter],” Hassan added. “It’s a product thing we’re working on.”

You can watch video of the interaction below:

President @realDonaldTrump is right to slam Twitter’s “fact checks” on his tweets.

“We’re trying to get the shitty people to not show up, it’s a product thing we’re working on” – Olinda Hassan, Twitter pic.twitter.com/JVep0kZjMb

Critics have long questioned the motives and intentions of Twitter bosses.

Hassan wasn’t the only one exposed.

But Roth has a history of comments such as comparing Kellyanne Conway to infamous Nazi Joseph Goebbels and insulting flyover states for majority voting for Trump.

I’m just saying, we fly over those states that voted for a racist tangerine for a reason.

“Today on Meet The Press, we’re speaking with Joseph Goebbels about the first 100 days…” —What I hear whenever Kellyanne is on a news show

And that means he’s violated the very same rules he helped create.

Yet Twitter singled Trump out this week and called his comments on mail-in voting integrity into question.

Rep. Adam Schiff, D-Calif., could just as easily be flagged for fake news and disinformation by continuing to spread lies about the Russia hoax. But he’s not.

For years he peddled junk stories on a false collusion narrative, one in particular which was spread after former special counsel Robert Mueller had determined there was no evidence of collusion.

Most Americans have not read Mueller’s report.

Here’s what we do know, and what we are working to find out: pic.twitter.com/kNquinghRO