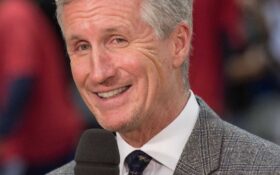 NBA announcer Mike Breen may have become known for shouting “Bang!” during important baskets by the New York Knicks, but he just made headlines for some more personal news.

His Long Island home burned down on Sept. 23.

Officials told TMZ they’re still investigating the cause of the fire.

The Manhasset-Lakeville Fire Department wrote online that they had learned of the fire through a “residential automatic alarm” around 4 a.m.

As of Thursday, the fire department remained unsure about the identity of the homeowner. They told The Washington Post that no one was present at the time of the fire, but they said that the neighbors had identified the house as Breen’s.

MLB announcer Michael Kay told The Washington Post that Breen had been traveling with his wife at the time.

Kay — one of Breen’s close friends — also said, “There was no loss of life whatsoever.”

However, Kay reportedly added that Breen has lost personal valuables, like handwritten notes from NBA games. He described the house as “destroyed,” according to the Post.

“The reason he asked me to say this,” Kay said on the radio, “is that so many people have reached out, and he’s in the middle of trying to get his life together dealing with insurance companies, trying to get clothes that he can wear on the air next week when the NBA starts.

ESPN said in a statement, “Mike is a cherished member of the ESPN family and he knows he has our full support through this excruciating circumstance. We know the damage is devastating, and at the same time, we are grateful that he and his family are safe.”

Breen has yet to issue his own statement.

TMZ obtained a video from the scene, and the Manhasset-Lakeville Fire Department tweeted its own video.

That Mike Breen ‘bang’ gave life to me pic.twitter.com/0wjBLSoCZU