VIDEO: Democratic judge DRAGGED out of courtroom after meltdown - The Horn News 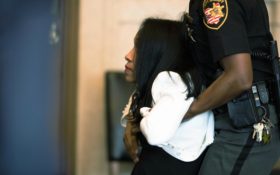 Chaos erupted in an Ohio courthouse when a Democratic ex-judge was sentenced to jail time on Monday.

Tracie Hunter, a former Democratic judge who was exposed for corruption, was used to handing out prison sentences.

Monday, Hunter was the one watching her fate play out in the hands of someone else.

Her reaction upon hearing the judge’s final verdict?

She dragged her heels — literally!

A deputy sheriff had no choice but to drag Hunter away, who went limp — and it was all caught on camera!

Supporters stood and yelled in anger, and deputies intercepted a woman who tried to rush to free her.

There were more demonstrations outside the Hamilton County Courthouse, and civil rights activists said there will be boycotts or other actions in protest.

You can watch the candid video of the courtroom scene below:

Hunter, who will serve a year of probation following her jail time, was convicted for illegally giving classified documents to a youth corrections officer — who was Hunter’s younger brother.

Hunter is not well after a car accident caused head injuries, authorities said. The prosecutor in the case, Joe Deters, recommended that Hunter undergo a mental evaluation.

“She has been incredibly disrespectful to you and the justice system,” he said to the judge before sentencing, according to The Sun. Deters was referring two things specifically: Hunter, who had been fighting off the initial conviction in an exhausting string of trials and appeals dating back to 2014, and her supporter’s behaviors.

Judge Patrick Dinkelacker received rude letters from Hunter’s supporters and said they were an attempt to intimidate him.