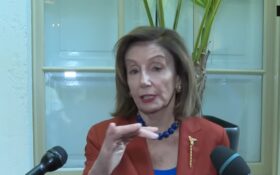 House Speaker Nancy Pelosi has become stressed about the infrastructure bill… and it’s showing. On Wednesday she gave a bizarre interview with CNN, where she snapped at normally friendly journalists.

At one point, a reporter acknowledged that the Senate may kill the House’s latest version of the bill. The reporter asked Pelosi, “Why and get mad at members… why twist the arms of moderates if this is not going to move anywhere?”

She blinked, took a step back, and snapped, “What are you talking about?”

She continued, “We have a responsibility to uphold, to lift up the full faith and credit of the United States of America… We cannot predicate our actions in the House on what could happen in the Senate. We can when we’re coming to agreement on a bill. But in terms of this, I have no patience for people not voting for this.”

Pelosi has every reason to feel stressed. She’s failed to diffuse the tension between the House Democrats and the Senate Democrats. On one hand, the House speaker doesn’t want to pass a bill doomed to fail in the Senate. On the other hand, she committed to a Thursday on the infrastructure bill, even though the Democrats have, so far, failed to muster enough support for this bill in the Senate.

However, she also said on Wednesday, “I said we’ll have the vote tomorrow… I want it to pass. So, what we wanted to do is to pass tomorrow.”

The dissonance is hard to believe, and it didn’t stop there. The entire interview seemed strange.

For one thing, Pelosi opened the press conference by talking about the Congressional baseball game. “So we had a very productive meeting. Today is the baseball game… And it was actually — well, we can go on if you want to talk baseball later.”

Of course she made time for some partisan attacks before taking questions about the infrastructure bill. “I spent a good deal of time in the meeting talking about the debt ceiling… The fact that the Republicans are being so irresponsible is no surprise, but nonetheless, disappointing as always. So in any event, that’s what we spent most of our time on, the debt ceiling.”

Finally, she started discussing the infrastructure bill, and she repeated Biden’s slogan about the bill being costless. “In terms of giving people an update as to where we are, the president is negotiating, as is well known — I keep reading it in the Daily Metropolitan Journal… We’re hoping we can come to a place. It’s not about a dollar amount. The dollar amount, as the president has said, is zero. This bill will be paid for. It’s about what are the values that we share.”

After that, she discussed Democratic infighting, even though no one asked. “I have calmness because I have confidence in our House Democrats. They care about America’s working families universally. And the vision that the president has put forth is one that we share. We’re the Democratic Party. We have our differences of opinion. We’re not a lockstep, rubber-stamp party. Who would want that?”

Raju asked her, “Do you believe the Progressives’ threat, that they’re saying half the [Progressive Caucus] will vote against this if the bill back better bill isn’t moved first, it’s not going to move first before Thursday? Do you buy that threat?”

Pelosi declined to answer this question. “I don’t speak for them,” she said.

Instead of answering the question, she patted herself on the back for… doing her job. “The 13 acted in a timely fashion to reach the September 15th goal, which everybody says is impossible. But they did.”

The reporters remained skeptical of Pelosi’s non-answer. One unidentified reported asked a similar question about the Progressive Caucus. Again, Pelosi neglected to answer.

The reporter asked, “Speaker Pelosi, if progressives are still threatening to block this bill by the end of today, can you still move forward with the vote tomorrow?” Pelosi cryptically said, “We take it one step at a time.”

Then, she turned to a journalist, pointed at him, smiled, and asked, “You’re the one that started this, so what do you want?”

From there, Pelosi became even more hostile. She pointed at the same journalist again and said, “I’m not calling you a troublemaker but… instigator over here working for the — the American people.”

One reporter asked whether she wants the reluctant Senators to lay out their requests. Pelosi answered curtly and then criticized CNN for profiting from sensationalism.

“They’re having a values discussion with the president of the United States,” she said. “I know you saw ads and all the rest, one, demands and split and all that, but this is much more amicable than you would think just watching television or reading the paper.”

Pelosi snaps at a reporter questioning her strategy on the debt ceiling: “What are you talking about?!” pic.twitter.com/1vsgvDkGjS