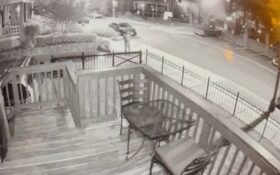 Matt Dornic, head of public relations for CNN, tweeted footage from a security camera Tuesday. In the video, he appears to be dodging a drive-by shooting.

He captioned the video, “Here’s a video of me dodging random gunfire in NW DC last night at 842 pm. This is unacceptable.”

He also instructed viewers to raise the volume, in order to hear the 10 gunshots.

In the video, Dornic runs offscreen after the first few shots.

The footage doesn’t show the shooter. It seems the gun was outside the frame.

The video has amassed 850,000 views as of Wednesday morning.

(Volume up) Here’s a video of me dodging random gunfire in NW DC last night at 842 pm. This is unacceptable. pic.twitter.com/bhqXMoAkXl

The Independent reached out to the local police who confirmed reports of Monday night’s gunfire in Washington’s Bloomingdale-LeDroit Park neighborhood, a residential part of the city full of single-family homes.

The police closed the block for two hours that night, Dornic told The Independent.

“As of last night there was a working theory that the gunfire was potentially coming from someone on foot, or another car, towards the car driving past me,” Dornic said.

In an interview with the blog Mediaite, Dornic said that gunfire is becoming more and more frequent in the neighborhood.

The F.B.I. collects data on neighborhood crime. The agency has not yet released its data on this neighborhood, but it did confirm a recent spike in murder and violent crime nationwide.

Dornic told Mediaite that he sought to raise awareness about crime in the city. Dornic also said that he was only a few blocks away from July’s shooting near the Le Diplomate restaurant, also in Northwest D.C.

He became flustered after nearly witnessing two shootings within the span of three months, Mediaite reported.

On Twitter, one user asked Dornic, “Is it ‘unacceptable’ because it’s in NW?”

“NW” refers to Northwest D.C., which includes the plurality of tourist attractions and federal offices.

Dornic replied, “No it’s unacceptable bc no one should be terrified to walk down the street.”

No it’s unacceptable bc no one should be terrified to walk down the street.