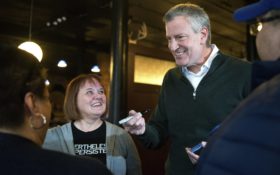 New York City Mayor Bill de Blasio let his soul free for the Sunday service in South Carolina — and footage of the episode has caused a huge amount of controversy.

Hillary Clinton’s political ally joined a crowd full of believers, all flapping their arms in unison… yet there was only one thing that didn’t sound quite right.

Courtney Gross of NY1 tweeted the video, commenting “I wonder if the @NYCMayor realizes who sings this song.”

Sponsored: Will you be too late? (read this today)

The song playing in the background was “I Believe I can Fly,” by the embattled R&B singer R. Kelly. It seems de Blasio couldn’t have picked a worse time to get loose.

Kelly has been dominating the headlines for all the wrong reasons.

The press stems from his sexual abuse charges – Kelly may not be topping any charts ever again. He’s facing 10 felony counts, including allegations of pedophilia and child pornography.

And although he was always marred by controversy in the past (starting with a relationship with a minor in 1994), over the past two weeks he’s become a particularly menacing figure after allegations surfaced that he kept numerous women trapped in an abusive cult for years. Sony Music has since dropped him and he had an all-time low meltdown on live television that spawned millions of reactions across social media.

Did de Blasio not realize?

Or did he simply not care?

“The Mayor wasn’t the church’s DJ and he certainly can’t be expected to recognize every R. Kelly track,” Phillips wrote in a statement. According to Billboard, the song was arguably Kelly’s most famous. It spent six weeks at number one in 1996, and had a 32-week run on the charts.

Take a look at the embarrassing incident below —

I wonder if the @NYCMayor realizes who sings this song ???? #SouthCarolina pic.twitter.com/zHOESeQDKU