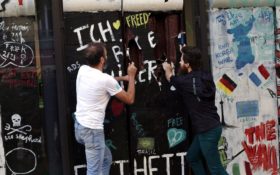 A French chocolate sculptor celebrated the 30th anniversary Saturday of the opening of the Berlin Wall by taking a hammer to a chocolate replica of the infamous barrier, distributing the sweet chunks to applauding bystanders.

Patrick Roger said it felt “amazing to share the taste, the values and a certain wind of liberty.”

Just as Berliners smashed chunks out of the concrete wall, Roger and an assistant attacked the replica with gusto. They quickly smashed a hole with their hammers and grasped an outstretched hand poked through it by someone on the other side.

Made with 200 kilos (440 pounds) of chocolate, the wall scrawled with the words “freedom” and, in German, “I am a Berliner!” was then brought crashing down onto the pavement in front of Roger’s chocolate store in Paris, shattering into hundreds of pieces.

Delighted bystanders gnawed on the chunks and carried away bags-full.

The Parisians and tourists who came to watch the tasty spectacle included Cecile Reveret, who lived for a few years in East Germany before the wall’s collapse, which was a pivotal moment in the fall of Communism in eastern Europe.

“It is a magnificent idea. That’s why I came. I have pieces of the wall now,” Reveret said. “I wasn’t there for the fall in 1989. But I was with all my heart supporting the reunification and these Eastern Germans that I had the chance to mix with, and who had tears in their eyes sometimes when they mentioned the wall.”