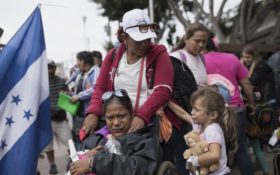 After traveling through Mexico with great fanfare for a month despite President Donald Trump’s warnings, nearly 200 Central American migrants stormed over the weak border wall currently in place when immigration officials denied their requests for asylum.

In an anticlimactic twist, about 50 asylum seekers were allowed past a gate controlled by Mexican officials to walk across a long bridge but were stopped at the entrance to the U.S. inspection facility at the other end. They were allowed to wait outside the building, technically on Mexican soil, without word of when U.S. officials would make a decision.

Illegals began chanting former President Barack Obama’s campaign slogan, “Si, Se Puede!” (Yes we can!), as well as “Gracias, Mexico!” (Thanks, Mexico!) as they moved six miles away and stormed the fence on the U.S. – Mexican border.

Mexico has allowed these refugees to move through their country unimpeded — prompting their gratitude.

Another 50 or so illegals camped on blankets and backpacks in Tijuana outside the Mexican side of the crossing, prohibited from even getting close to the U.S. inspection building.

The illegal immigrant hopefuls began the day with anticipation, traveling in red-and-white school buses under police escort to a beachfront rally in Tijuana, where a steel fence juts out into the Pacific Ocean. They sang the Honduran national anthem, and supporters on the San Diego side of the fence waved a Honduran flag.

After a final briefing from lawyers and minutes before they were to begin a short walk to the border crossing, U.S. Customs and Border Protection Commissioner Kevin McAleenan announced that the San Ysidro border crossing, the nation’s busiest, had “reached capacity” for people without legal documents and that asylum-seekers may need to wait in Mexico temporarily.

CBP officials have issued a statement saying they are at capacity for the day to accept people seeking asylum at the San is Ysidro port of entry just as #caravan arrived. “This is to please Donald Trump,” said one organizer. pic.twitter.com/dD6MNNTnPD

Trump has commented frequently on the caravan since it started in Mexico on March 25 near the Guatemala border and headed north to Tijuana. His broadsides came as his administration vowed to end what officials call “legal loopholes” and “catch-and-release” policies that allow people requesting asylum to be released from custody into the U.S. while their claims make their way through the courts, which can take years.

Attorney General Jeff Sessions has called the caravan “a deliberate attempt to undermine our laws and overwhelm our system.” Homeland Security Secretary Kirstjen Nielsen said asylum claims will be resolved “efficiently and expeditiously” and warned that anyone making false claims could be prosecuted.

Asylum-seekers are typically held for up to three days at the border and then turned over to U.S. Immigration and Customs Enforcement. If they pass an asylum officer’s initial screening, they may be detained or released into the U.S. with ankle monitors.

Federal officials have confirmed that hundreds of migrants have already crossed into the United States illegally.