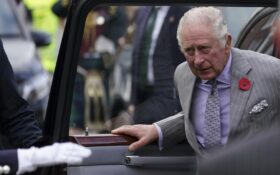 A 23-year-old man was arrested Wednesday after hurling eggs and vitriol at King Charles III and Camilla, the queen consort, as they walked in the northern England city of York.

The incident happened as the king and his wife were entering York through Micklegate Bar, a medieval gateway where monarchs are traditionally welcomed to the city.

Video footage showed several eggs in motion and smashed on the ground. None appeared to hit the royal couple, who continued to be greeted by local dignitaries and to meet assembled well-wishers.

Several police officers could be seen grappling with a man at a crowd barrier. Britain’s PA news agency reported that the protester booed and shouted “This country was built on the blood of slaves” as he was being detained.

Other members of the crowd tried to drown him out by chanting “Shame on you” and “God save the King.”

North Yorkshire Police said a 23-year-old man was arrested on suspicion of a public order offense and was being held in custody.

Charles and Camilla traveled to York as part of a series of engagements around the U.K. marking the start of the new king’s reign. They attended a service at the city’s cathedral, York Minster, and unveiled a statue of the king’s mother, Queen Elizabeth II, who died in September after 70 years on the throne.

Take a look at these videos from the scene —

Someone threw an egg at Charles.pic.twitter.com/7f4kg751yO

The way King Charles did not even break a sweat over that man throwing egg is the prize for me.😂😂The Royal family is made of stronger stuff than politicians, thats for sure. There will always be one 🤡, So 😎
pic.twitter.com/aKcbuWYtm4