Video: Biden struggles to explain 'chips that are three nano' - The Horn News 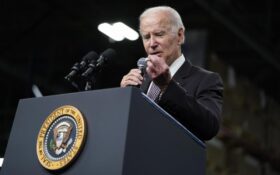 President Joe Biden on Tuesday visited the site for a new computer chip plant in Arizona.

However, Biden struggled to explain explaining how more U.S. chip production will change Americans’ lives, and Biden broke down when discussing semiconductors that are just three nanometers in size.

“He buys a few of these chips,” Biden said of Cook. “He’s a small customer.”

Biden was touring a plant being completed by the Taiwan Semiconductor Manufacturing Co., a construction project announced in 2020 during Donald Trump’s presidency. Biden was also taking credit for the CHIPS and Science Act, a bipartisan law with supporters and detractors in both parties.

Some Republicans viewed the CHIPS Act as important for national security. Rep. Michael McCaul, the top Republican on the House Foreign Affairs Committee, said it was critical to protect semiconductor capacity in the U.S. and that the country was too reliant on Taiwan for the most advanced chips. That could prove to be a major vulnerability should China try to take over the self-governing island that Beijing views as a breakaway province.

Meanwhile, House Republican Leader Kevin McCarthy and Sen. Bernie Sanders, I-Vt., have both criticized the CHIPS Act as a blank check. McCarthy called the bill “corporate welfare to be handed out to whoever President Biden wants.”

The $280 billion law provides more than $52 billion in grants and other incentives for the semiconductor industry as well as a 25% tax credit for those companies that invest in chip plants in the U.S. It calls for increased spending on various research programs that would total about $200 billion over 10 years, according to the Congressional Budget Office. The CBO also projected that the bill would increase deficits by about $79 billion over the coming decade.

“What I’m most excited about is people are starting to feel a sense of optimism as they see the impact of the achievements in their own lives,” Biden said Tuesday. “It’s going to accelerate in the months ahead and it’s part of a broad story about the economy we’re building that works for everyone.”

The president is battling high inflation that has left most Americans feeling as though the country’s economic prospects are bleak. That has provided Republicans with a target for saying Biden is not meeting the needs of American families.

Biden also acknowledged the persistence of high prices. So much for transitory inflation!

BIDEN: "It's gonna take time to get inflation back to normal levels." pic.twitter.com/Y4kSPnwwSZ