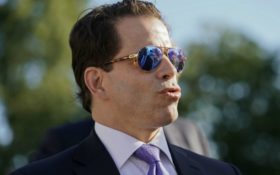 Former White House communications director Anthony Scaramucci is attempting a comeback into the national spotlight — and this time he wants to be liberal superstar, not conservative.

He went on CNN to tell the world he’s ended his friendship with President Donald Trump.

After working for and befriending Trump, now Scaramucci is accusing the president of being wa racist on CNN — and worse.

He’s “gone off the rails,” Scaramucci said of Trump. He went on “Anderson Cooper 360º” to say that he no longer supports Trump, and said the president is on a “worse level than racism,” and claiming that he’s “racist against everybody.”

“Why do you want to go full racism like that and divide the country?” he said as he recalled on his time working in the White House.

When grilled by Anderson Cooper as to why it took him so long to speak out about Trump, Scaramucci talked about his blue collar upbringing as a child.

Scaramucci is following in a long line of people who have worked for the Trump administration in the past, only to trash the president in the press later on.

Scaramucci said he is joining the so-called “resistance” by dragging Trump’s name through the mud.

Page Six even reported that Scaramucci was seen dining with former WH U.N. ambassador Nikki Haley several ago, speculating that that dinner date may have indicated a plot between the two disgruntled former employees.

She called the attack “unnecessary.”

This seemed to all but end speculation that Haley would be Trump’s running mate in 2020.

Trump, hearing Scaramucci on the airwaves, took a dig at his former pal on Twitter.

Anthony Scaramucci, who was quickly terminated (11 days) from a position that he was totally incapable of handling, now seems to do nothing but television as the all time expert on “President Trump.” Like many other so-called television experts, he knows very little about me…..

…..other than the fact that this Administration has probably done more than any other Administration in its first 2 1/2 years of existence. Anthony, who would do anything to come back in, should remember the only reason he is on TV, and it’s not for being the Mooch!

And Scaramucci responded, suggesting that Trump was losing his edge.

You are losing your fastball— very weak troll. Bullying is the most anti-American thing in our culture and it is emanating from the Oval Office. Many have called and are willing to work on a necessary replacement. Time to call in a good relief pitcher. @potus is lost. https://t.co/7fiFHbd7O6

You can watch Scaramucci’s entire interview below: