VICTORY! Judge rules against Dems in Florida - The Horn News 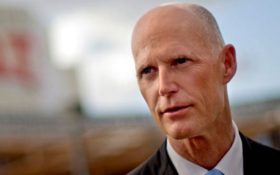 A Florida judge is rejecting a Democrat challenge to the rules that will be used in a hand recount in the state’s contentious U.S. Senate race.

U.S. District Judge Mark Walker late Thursday ruled against Sen. Bill Nelson and Democrats in another one of the lawsuits surrounding the recount.

The verdict is a boon to Florida Gov. Rick Scott, who gained nearly 1,000 additional votes after the machine recount was completed on Thursday.

With the statewide machine recount finished, our margin of victory has increased by nearly 1000 votes. @SenBillNelson, it’s time to admit this race is over.

During the hand recount, election officials look at just the ballots that weren’t recorded by voting machines. With millions of votes already counted, that likely won’t be enough to make any difference.

Under state law, voters must use only approved markings or their ballot is disqualified. And they can’t simply cross out a mistaken vote but must explain in writing why they did so.

Democrats lawsuit contends that has a discriminatory effect on non-native English speakers and illiterate voters.

But Walker rejected that, and found the rules were reasonable and constitutional.

Florida counties must finish the hand recount by Sunday.

The race became extremely tight after the election when heavily-Democratic Broward and Palm Beach counties suddenly “found” a stockpile of nearly 83,000 additional votes.

Republicans accused Democrats of mass election fraud and said they were trying to steal the election. Democrats denied the accusations, and insisted that every vote be counted.

After the dust settled, Scott is still the clear victor.