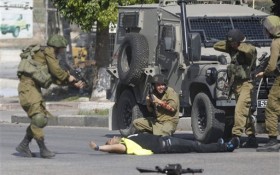 A Palestinian wearing a T-shirt with the word “press” in large letters used the disguise to get close enough to stab and wound an Israeli soldier Friday, and the entire thing was caught on camera. The Israeli soldier’s unit rushed to his aid and quickly shot the attacker dead, the latest in a month-long spate of attacks.

Three more Palestinians were killed by Israeli fire in clashes between stone-throwers and Israeli troops in several West Bank towns and on the Israel-Gaza border, Palestinian medics said.

Also Friday, Palestinians firebombed a site revered by some Jews as the tomb of the biblical figure Joseph. 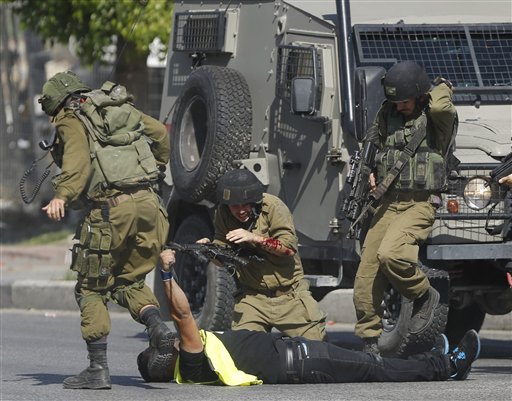 Palestinian factions had called for protests against Israel in a “day of rage” Friday. Tensions and violence have been mounting in recent weeks, in part fueled by Palestinian fears that Israel is trying to expand its presence at a major Muslim-run shrine in Jerusalem, a claim Israel has denied.

In the past month, eight Israelis were killed in Palestinian attacks, most of them stabbings.

The violence comes at a time when a possible partition of the land between the Jordan River and the Mediterranean into two states — Palestine alongside Israel — is fading fast.

Friday’s stabbing took place on the sidelines of clashes between Israeli troops and Palestinian stone-throwers in the West Bank city of Hebron. The attacker blended in with journalists standing a few meters (feet) from soldiers who were firing tear gas at the stone-throwers at the time.

At one point, shouts were heard, followed by several gunshots. Troops rushed to the scene of the stabbing, near a military jeep, and administered aid to the injured soldier who was eventually taken away by ambulance. The attacker lay on the ground, still clutching a knife in his right hand.

The incident heightened concerns among journalists about their safety. The Foreign Press Association for Israel and the Palestinian territories said it “marks a worrying development” that demands all media operate with greater caution. 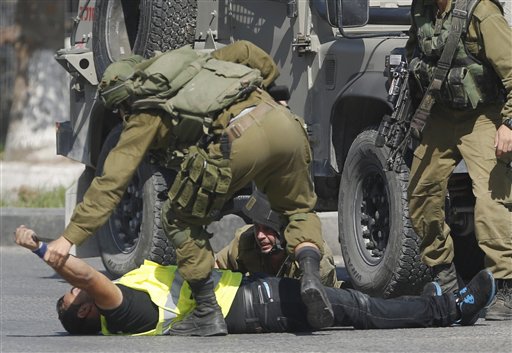 “We utterly deplore this violation of press privilege and call on local Palestinian media organizations to immediately verify all media credentials,” the FPA said in a statement.

The attacker’s name has not been released, but local journalists said they did not know him.

Clashes erupted across the West Bank on Friday, including in biblical Bethlehem where dozens of Palestinians hurled stones and firebombs at Israeli troops.

Many of the Palestinians involved in stabbing attacks in the past month came from east Jerusalem, the sector of the city captured by Israel in 1967 and sought by the Palestinians as a future capital. The recent attacks have largely been carried out by individuals with no known ties to militant groups.

In response to the stabbings, Israel has taken unprecedented measures, including setting up checkpoints in Arab neighborhoods of Jerusalem despite its long-standing assertion that the city is united.

In one area, men passing through a checkpoint Friday said they lined up and were ordered by troops to lift their hands and shirts to show they were unarmed before being allowed to pass.

Israel also imposed restrictions on Muslim worship at the Al-Aqsa Mosque compound, Islam’s third holiest site in Jerusalem’s walled Old City. Men under 40 were barred from the shrine, and hundreds of young worshippers spread out prayer mats on streets leading to the Old City. 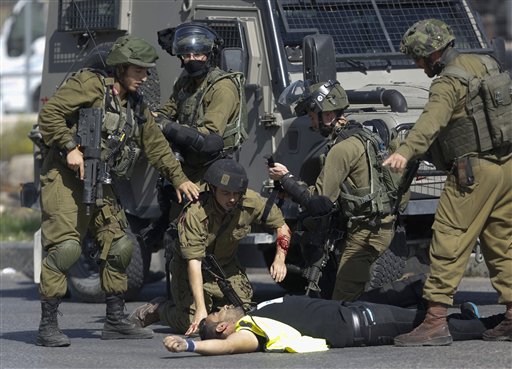 The widespread perception among Palestinians that Al-Aqsa is under threat from Israel has fomented tensions and violence.

Abbas has told his security forces not to stop Palestinian stone-throwers heading to confrontations with Israeli troops.

Abbas on Friday condemned the arson in Nabulus at the site revered as Joseph’s tomb as “irresponsible,” ordered an investigation into who was behind it and said repairs would begin immediately, according to the official Palestinian news agency WAFA.

Dore Gold, a senior Israeli Foreign Ministry official, said the site was targeted “just because it is a place in which Jews pray.” Lt. Col. Peter Lerner, an Israeli army spokesman, said the attack violates freedom of worship and that the military will “bring the perpetrators of this despicable act to justice.”

For centuries, the site has been identified with the biblical Joseph. The tomb has become a popular prayer site in recent years among some sects of religious Jews.