Veteran flatlined by value of antique Rolex watch (can you guess how much?) - The Horn News 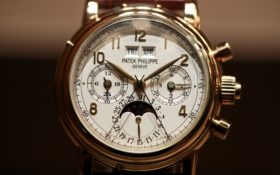 An “Antiques Roadshow” guest in North Dakota was floored when he found out the current value of a Rolex watch he purchased while serving in the military more than four decades ago.

The man, identified only as David on an episode that aired Monday, said he paid $345.97 for the watch in 1974 while serving in the Air Force.

He said he planned to use the watch to scuba dive, but decided it was too nice for the water and tucked it away in a safe deposit box until he brought it to a show taping in West Fargo.

Appraiser Peter Planes told David the watch was similar to one once worn by Paul Newman that auctions for $200,000. And because it had the tiny word “Oyster” inscribed on the face that made it “extremely, extremely rare,” which could double the value.

David toppled to the ground when he learned the watch could sell for $400,000.

When he regained his footing, Planes told him that because the watch was in pristine condition it could fetch up to $700,000 — a price that caused David to utter a word that was bleeped from the show.