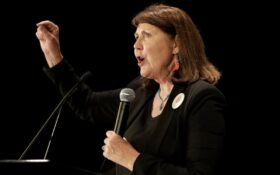 “Serving Arizonans has been my absolute honor and joy, but after much consideration, I have decided not to seek re-election in 2022. I will continue the good fight through this Congress, and when the term is up, I will hand over the baton,” she said in a statement.

Kirkpatrick, 70, has represented two different districts during her congressional career — first a district in mostly rural northern and eastern Arizona and more recently the 2nd District that includes much of the Tucson area in southeastern Arizona.

In between her House stints, she ran unsuccessfully in 2016 for U.S. Senate, losing to incumbent Republican John McCain, who died in 2018.

In early 2020, Kirkpatrick was absent from Congress for six weeks for treatment of alcoholism, a move she said was prompted by a fall that she saw as “a little bit of a wake-up call.”

Kirkpatrick, who won reelection in November to her second term from her current district, told Arizona media outlets that her health and recovery weren’t factors in her decision to leave Congress and that she wanted to spend more time with family, including three grandsons.

The district has been competitive in recent elections but Kirkpatrick defeated Republican challenger Brandon Marlin by a nearly 40,000-vote margin in November.

An attorney, Kirkpatrick was a state legislator before first running for Congress.

Kirkpatrick lost a 2010 reelection bid in 2020 to Republican Paul Gosar. But Kirkpatrick won the seat back in 2012 while Gosar ran in a neighboring district after redistricting.