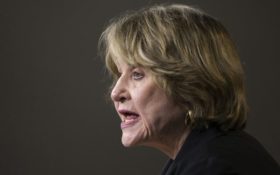 Veteran Congresswoman Rep. Louise Slaughter died Friday days after falling in her residence, her top aide said. The 88-year-old lawmaker had been the first woman to chair the House Rules Committee and was her party’s top member on the panel when she died.

The New York Democrat died at George Washington University Hospital in Washington, said Liam Fitzsimmons, her chief of staff, a week after a fall in which she’d sustained a concussion.

Slaughter was serving her 16th term in the House, and her 31 years in the chamber made her its third longest-serving woman, according to the official House website. She chaired the Rules committee from 2007 through 2010.

Slaughter had a degree in microbiology and was originally from Harlan County, Kentucky, and her soft, twangy accent always seemed out of place for someone representing a district around Rochester, New York. But she was repeatedly re-elected —including a narrow victory in 2014 — and was the longest-serving member of Congress from New York when she died.

“Louise never forgot her roots as the daughter of a Kentucky blacksmith,” House Minority Leader Nancy Pelosi, D-Calif., said in a statement. “She brought the grace and grit of her Southern background to her leadership in the Congress, building bridges and breaking down barriers all with her beautiful accent. Louise could be fiercely debating on the floor in the morning, and singing in harmony with her colleagues across the aisle in the evening.”

Brendan Buck, spokesman for House Speaker Paul Ryan, R-Wis., tweeted, “The loss of Louise Slaughter is so sad. She was a powerful voice for House Democrats and incredible advocate of their agenda.”

Slaughter was the chief force behind a 2012 law to ban insider stock trading based on congressional knowledge and require disclosure of market activities by lawmakers. She also helped write the Violence Against Women Act and a 2008 law designed to protect people with genetic predispositions to health conditions from facing discrimination from their employers or health insurance companies.

Her death creates a vacancy at the top of the Democratic side of the Rules panel, which sets the terms of House floor debates. It’s likely to be filled by Rep. Jim McGovern, D-Mass.