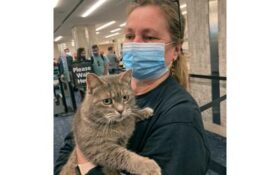 A Maine family that long ago gave up on a lost family cat is being reunited — more than six years and 1,500 miles later.

Denise Cilley, of Chesterville, said she was shocked to get a voicemail last week announcing her cat, Ashes, had been located in Florida.

Ashes disappeared in 2015 during a 10th birthday celebration for her daughter.

“They looked for her for quite a while, and they sadly concluded she probably had become prey for a predator,” said Janet Williams, a family friend in Florida who took temporary custody of the cat, told WABI-TV.

A veterinarian’s office determined the kitty’s identity, thanks to an implanted microchip. But how she got to Florida remains a mystery.

“I have interrogated her quite strictly and she is not talking,” Williams said.

Ashes was being returned to Maine on Wednesday, accompanied by one of Janet Williams’ friends.

Cilley said she planned to be on hand to collect her pet at Portland International Jetport.