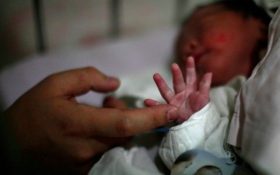 A Utah woman is crediting twin sisters for helping deliver her baby as she was stopped at an intersection.

Emily Acor tells Salt Lake City’s KSL-TV that she was resting at home in Orem with her new daughter, Sophia, Monday after the delivery.

Acor says she was heading to the hospital with her mother Friday evening when her water broke.

They stopped the car in the middle of an intersection and Acor’s mother flagged down two women for help.

Acor, who has two other children, says she now considers the sisters part of the family.