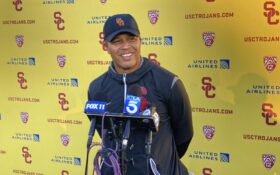 Clay Helton’s players hate the fact their head coach’s firing was a cause for celebration for much of Southern California’s vast football fan base.

When those players went back to work Tuesday night, Helton’s sudden departure was a cause for mourning and reflection — and a renewed determination to make him proud.

“It hurt, for sure,” veteran safety Isaiah Pola-Mao said. “Coach has always had a huge impact on me. I signed here with him in mind. We wanted him to be the next Pete Carroll. We wanted to lift him up, and for him to be great. Of course, things don’t go our way.”

At the high-pressure level of college football inhabited by USC, it’s sometimes easy to forget the vast majority of Helton’s players decidedly do not share the profound dislike of their coach that practically every vocal fan of the Trojans seems to hold.

Thousands of people chanted for Helton’s firing last Saturday night at the Coliseum during USC’s embarrassing loss to Stanford. Many of those same people welcomed athletic director Mike Bohn’s decision Monday with online glee — and the players saw it.

Many of the people who had daily interactions with Helton on campus and in the locker room still revere him as a mentor and a father figure to his players. Many of those players still haven’t processed the fact they must continue a long season without the coach who recruited them and embraced the responsibility of fostering their development into well-rounded adults.

“It was heart-wrenching for a lot of us,” receiver Drake London said. “He’s such a good man to us, on and off the field. It was sad to see him go.”

One day after Helton’s seven-season tenure ended with his firing, the Trojans (1-1, 0-1 Pac-12) held their usual opening practice of game week on campus. USC visits Washington State for its road opener on Saturday with Donte Williams as interim head coach.

USC only allowed three team captains to speak with reporters after practice, but Bohn and Williams both spoke at length about the challenges ahead after changing leadership only two games into a season.

“For young people, sudden change is very, very difficult, and it’s really difficult for all of us,” Bohn said. “I have tremendous respect for Clay Helton as a coach and a man.”

Helton and Bohn jointly broke the news to the team Monday. Bohn said Williams will run the Trojans with his big-picture motivational skills, while coordinators Graham Harrell and Todd Orlando will handle most of the game planning, as they did under Helton.

“It happened pretty quick,” punter Ben Griffiths said. “But it was nice to have that time. … We understand as players, we’ve got a job to do, and that’s to finish off this season.”

Bohn revealed nothing new about the reasons for the unusual timing of his decision on Helton, who had won nine straight regular season games before the Stanford blowout.

“It just really felt like the right time, and I think it was the right time for (Helton) as well,” Bohn said. “There’s a sense of knowing when to play things a certain way, and having that gut feeling. I think we had the right one.”

But USC’s actions make it clear the school was past tired of waiting for Helton’s on-field success to catch up to his team-building skills. A program that believes it should be an annual national title contender finally moved on from a coach who never got it there.

Helton’s record was 46-24 — also a fairly solid mark at a normal program, although he also had the school’s first losing season in 18 years back in 2018. He won one Rose Bowl and one conference title in six attempts, falling short of two more Pac-12 crowns in the conference title game.

The Trojans’ improvements over the past decade include the building of their $70 million headquarters in the John McKay Center, along with $315 million in improvements to the 98-year-old Coliseum. USC expanded its recruiting resources and research capabilities in moves that both gave Helton every chance to succeed and put a strong structure in place to woo a successor if Helton was no longer around.

“We had a great offseason with great recruiting and continued investment in the football enterprise,” Bohn said. “In the end, when we really came out, I just don’t think we just had that same sense of belief that with all the resources and all the commitment we’ve put together that we could really aspire to those national championship aspirations that we talk about all the time.”