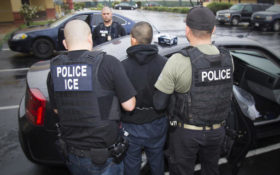 Just three days after she was caught at a Guatemalan airport trying to smuggle two 1,000-year-old Mayan relics out of the country, officials say, a U.S. woman has been caught again, this time riding in a vehicle with 166 other pre-Hispanic artifacts.

The case of Stephanie Allison Jolluck began Thursday at the Guatemala City airport when inspectors were reportedly tipped off by the weight of her luggage and found two large Maya stone carvings in her bags.

She told authorities she had bought the pieces, made between 600 and 900 A.D,, at a market in the tourist town of Antigua, Guatemala.

A judge released her on a form of personal recognizance, but on Sunday police stopped a car she was in and said they found dozens of other relics. Another American, Giorgio Salvador Rossilli, was also in the vehicle.

It was not clear if Jolluck had a lawyer. The U.S. consulate said it could not release any information due to privacy concerns. She could face charges of trafficking in national patrimony.

A woman by the same name has websites for photography and design businesses in the area of Antigua, Guatemala.

Investigations are ongoing, but Guatemala’s Culture Ministry said the two stone carvings are known as Mayan “axes,” named for their shape. The ceremonial carvings may have been associated with the sacred ball game of the Mayas, rather than any use as an axe.