US protections for salmon, steelhead are here to stay - The Horn News 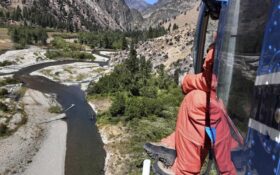 A five-year review by U.S. officials has determined that Endangered Species Act protections for ocean-going salmon and steelhead that reproduce in the Snake River and its Idaho tributaries must stay in effect.

The National Oceanic and Atmospheric Administration’s fisheries division review made public Thursday found that steelhead, spring and summer chinook, sockeye and fall chinook that return to Idaho in rivers from the Pacific Ocean still need their federal protections.

The protections include limits on fishing, restrictions on how much water can be used for irrigation, pollution controls for industries and dam operations on the Columbia and Snake rivers.

Of the four species that return to Idaho, sockeye salmon are considered the most imperiled and were classified as endangered in 1991. The fish reproduces in high mountain lakes in central Idaho and they teetered on extinction for much of the 1990s.

An elaborate hatchery program operated by the Idaho Department of Fish and game that tracks the genetic history of individual fish is aimed at restoring the species.

But the population of the sockeye salmon has not improved much since it was listed as endangered, the review said. The species remains “at high risk of extinction” amid challenges from climate change, a lack of food in oceans blamed on water warming and because of sea lion predation.

Snake River spring and summer chinook, classified as threatened in 1992, include fish populations in part of the Snake River and in Washington state in the Tucannon, Grande Ronde and Imnaha rivers. The fish are also deemed threatened in parts of Idaho’s Salmon River.

Historically, the fish spawned in Idaho areas that they can no longer reach, including above the Hells Canyon Dam and parts of the Clearwater River basin, the federal review said.

“Overall, the information analyzed for this 5-year review indicates an increased level of concern in the risk status” for the fish, researchers wrote.

The researchers cited declining population trends and that no fish populations are reaching a minimum threshold set by the Interior Columbia Technical Recovery Team. The team works to interpret information related to fish recovery.

Fall chinook were classified as threatened in 1992 and include fish in the mainstem Snake River below Hells Canyon Dam, the Salmon River and Clearwater River basins and in the Tucannon, Grande Ronde and Imnaha rivers in Washington state.

Those fish could be recovered by reintroducing them above above the Hells Canyon Dam complex. But Idaho officials have fought that option, fearing protections for fish above the dams could limit riverside farming and ranching operations.

The review found that the fish extinction risk has decreased for Snake River fall chinook, but “the implementation of sound management actions to address hydropower, habitat, hatcheries, harvest and predation remain essential to recovery.”

Steelhead, a favored sport fish classified as threatened in 1997, include fish in the Snake, Salmon and Clearwater rivers and in the Tucannon, Grande Ronde and Imnaha rivers in Washington state. The review noted that there are no longer any steelhead that once spawned in tributaries above Hells Canyon Dam.