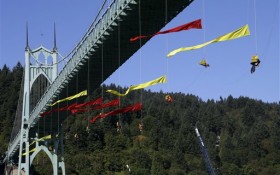 PORTLAND, Ore. (AP) — A federal judge on Thursday ordered Greenpeace USA to pay a fine of $2,500 for every hour that protesters dangling from a bridge in Oregon continue to block a Royal Dutch Shell icebreaker from leaving for oil drilling in the Arctic.

There was no sign that the protesters were about to leave Portland after the ruling in Anchorage by U.S. District Court Judge Sharon Gleason that Greenpeace is in civil contempt.

Gleason in May granted Shell’s request that activists protesting Shell’s Arctic drilling plans be ordered to stay away from Shell vessels and beyond buffer zones.

Earlier Thursday, the Shell oil icebreaker Fennica retreated when activists dangling from the St. Johns Bridge over the Willamette River refused to leave and to let the vessel pass.

Protesters on the bridge and kayakers on the river have been blocking the icebreaker from heading to the Arctic for a drill operation.

The Fennica arrived in Portland for repairs last week. The vessel was damaged earlier this month in the Aleutian Islands when it struck an underwater obstruction, tearing a gash in its hull.

It started its journey to the Arctic early Thursday before stalling in the face of 13 dangling activists linked by ropes. It turned around and inched its way back to Vigor Industrial’s dry dock, delighting those gathered on shore in the city known for environmentalism.

The U.S. Coast Guard warned the danglers they were breaking the law, but took no action. Petty Officer 1st Class George Degener said the agency did not tell those aboard the icebreaker to turn around.

“I don’t know what led the master and the pilot on board to come to that decision,” he said.

The icebreaker is a key part of Shell’s exploration and spill-response plan off Alaska’s northwest coast. It protects Shell’s fleet from ice and carries equipment that can stop gushing oil.

Environmentalists hope to delay the ship long enough for winter weather to prevent Shell from drilling until 2016. By that time, they hope the Obama administration has a change of heart on the issue.

“There is no Plan B, just as there is no Planet B; we have no intention of moving until President Obama rescinds the permit for Shell to drill in the Arctic,” said Daphne Wysham of the Center for Sustainable Economy.

The St. Johns Bridge is at a key location on the Fennica’s route from Portland to the Arctic. The ship’s journey will take it beneath the bridge, down the Willamette to the Columbia River which leads to the Pacific Ocean.

Portland police closed the bridge to traffic during the standoff. It was reopened shortly after the icebreaker reversed course.

The activists say they have water and food for the long haul. They also have their phones to stay in the social-media loop.

“The Fennica is headed back to its dock where it belongs — not the Arctic! #ShellNo,” tweeted Dan Cannon, a Greenpeace activist dangling from the bridge.