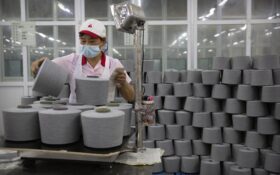 In a new report released Tuesday, the museum’s Center for the Prevention of Genocide says there is now “a reasonable basis” to believe that previously alleged crimes against humanity versus the Uyghurs are growing amid a concerted campaign to hide their severity.

“The Chinese government has done its best to keep information about crimes against the Uyghurs from seeing the light of day,” said Tom Bernstein, the chairman of the museum’s Committee on Conscience. “The Chinese government must halt its attacks on the Uyghur people and allow independent international monitors to investigate and ensure that the crimes have stopped.”

China has repeatedly rejected charges of human rights abuses and atrocities in the region.

The report, which cites witness testimony, publicly available information from dissidents and accounts provided by human rights groups, expands on the museum’s March 2020 findings that the Chinese Communist Party had persecuted, unlawfully imprisoned and otherwise severely deprived Uyghurs of their physical liberty.

The new findings include allegations of forced sterilization, sexual violence, enslavement, torture and forcible transfer. The U.S. government has already determined that China’s actions against Xinjiang’s Uyghur Muslim and other minority populations amount to genocide.

“The Chinese government’s assault on the Uyghur community — marked by the incarceration of between one and three million people as well as abuses such as forced sterilization, torture, sexual violence, and forced labor — is alarming in scale and severity,” said Naomi Kikoler, director of the museum’s Simon-Skjodt Center for the Prevention of Genocide. “The damage inflicted upon Uyghur individuals, families, and their community has left deep physical and emotional scars. The trauma from these atrocities will harm generations of Uyghurs.”

Kikoler said the 59-page report, “To Make Us Slowly Disappear: The Chinese Government’s Assault on the Uyghurs,” should serve as a wake-up call for the international community to boost pressure on Beijing to halt the repression in Xinjiang.

China has said that allegations of rights abuses are lies. Just last month, China’s U.N. Ambassador Zhang Jun attacked a statement signed by 43 countries condemning the reported torture and repression of Uyghurs and other religious and ethnic minorities in Xinjiang, where foreign governments and researchers say an estimated 1 million people or more have been confined in camps.

Zhang denounced “the groundless accusations” and unfounded “lies” and accused the United States and other signatories of poisoning the atmosphere of cooperation and “using human rights as a pretext for political maneuvering to provoke confrontation.”

Echoing the Chinese government’s long-standing position, he strongly defended Beijing’s efforts to develop Xinjiang, saying the lives of its people are getting better by the day and “your plot to obstruct China’s development is doomed to failure.”

The Associated Press reported in October that China’s control of Xinjiang had entered a new era in the four years since Beijing launched the brutal crackdown that swept up to a million or more Uyghurs and other mostly Muslim minorities into detention camps and prisons.

Chinese authorities have scaled back many of the most draconian and visible aspects of the region’s high-tech police state, including razor wire that once ringed public buildings, the AP reported after two visits to Xinjiang.