A new war? US ground troops heading to Syria - The Horn News 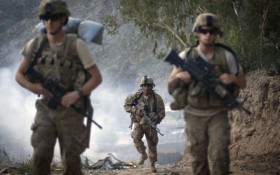 A small number of US special operations forces will be deployed to northern Syria to work with local ground forces in the fight against Islamic State militants, senior US officials said Friday, marking the first time American troops will be working openly on the ground in the war-torn country.

Although the number is small, only 50 special operatives to start, it marks an escalation of US involvement in the fight against the Islamic State, which controls a large part of northern Syria and has its self-proclaimed capital in the Syrian city of Raqqa.

One official said that a first group of forces — possibly a couple of dozen — will go relatively soon to assess the situation and determine which groups on the ground the U.S. can best work with. More special operations forces would follow once the US better determines what the needs are.

Defense Secretary Ash Carter hinted at the deployment earlier this week, saying the US was retooling its strategy in Iraq and Syria and would conduct unilateral ground raids if needed to target Islamic State militants. The US. has done special operations raids in Syria, and it participated in a ground operation to rescue hostages last week in northern Iraq that resulted in the first US combat death in that country since 2011.

The US will also be sending additional aircraft, including F-15 fighters and A-10s to the Incirlik air base in Turkey, likely repositioning them from other spots in the region.