US consumer spending rebounded in August despite COVID - The Horn News 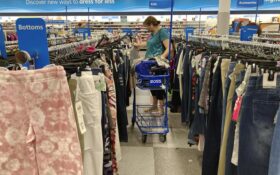 U.S. consumer spending accelerated in August amid a surge in COVID-19 cases, even as inflation stayed high due to snarled supply chains and a release of pent-up demand.

Consumer spending rose 0.8% in August, up from a decline of 0.1% in July. Income rose by a smaller 0.2%, the Commerce Department reported Friday. That suggests consumers dug into their savings to fuel more spending. Americans bought more furniture, clothes, and groceries, while the delta variant caused them to pull back on traveling and eating out.

Overall, the data signaled that despite a dent to consumer confidence, Americans are still spending enough to drive the economy forward. Most economists forecast that growth slowed in the July-September quarter, but expect that it will still come in at about a healthy 3.5% annual rate, down from 6.7% in the April-June quarter.

Inflation has risen sharply since the spring, eroding workers’ pay gains and raising pressure on Federal Reserve Chair Jerome Powell, who has said the increase will likely prove temporary. Supply shortages of everything from computer chips to furniture to paint and chemicals have driven up prices as the economy’s rebound from the pandemic recession caught many companies flat-footed.

Powell said Thursday that supply chain disruptions, such as jammed ports on the West Coast and factory shutdowns in Asia amid COVID spikes, have lasted longer than the Fed expected. Keeping prices stable is one of the Fed’s mandates, along with seeking maximum employment.

Still, Powell said he expected supply chain problems to start improving next year, which would start to push inflation lower in the first half of 2022.

There are early signs that spending picked up further in September, as new COVID cases have started to wane. Spending on airline tickets increased in late September and total credit-card spending rose in mid-September from a month earlier, according to a Bank of America report.