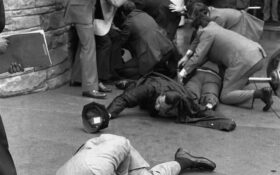 Attorneys for the U.S. government have indicated that they will not oppose a plan to lift all remaining restrictions next month on John Hinckley Jr., the man who tried to assassinate President Ronald Reagan in 1981.

U.S. District Court Judge Paul L. Friedman in Washington ruled last year that Hinckley can be freed unconditionally in June if he continues to follow the rules placed on him and remains mentally stable as he continues to live in Williamsburg, Virginia.

Hinckley, 66, has indeed remained mentally stable and violated no conditions, according to a letter filed by U.S. attorneys with the court on Thursday. That determination was based on letters from the Washington’s Department of Health, which has overseen Hinckley’s care.

“As such, the government has found no evidence to suggest that Mr. Hinckley’s unconditional release should not be granted as outlined,” the letter from the U.S. attorneys stated.

A court hearing is scheduled for June 1.

Hinckley was 25 when he shot and wounded the 40th U.S. president outside a Washington hotel. The shooting paralyzed Reagan press secretary James Brady, who died in 2014. It also injured Secret Service agent Timothy McCarthy and Washington police officer Thomas Delahanty.

Hinckley was suffering from acute psychosis. When jurors found him not guilty by reason of insanity, they said he needed treatment and not a lifetime in confinement.

Such an acquittal meant that Hinckley could not be blamed or punished for what he did, legal experts have said. Hinckley was ordered to live at St. Elizabeths Hospital in Washington.

In the 2000s, Hinckley started visiting his parents’ home in Williamsburg. A 2016 court order granted him permission to live with his mom full time, after experts said his mental illness had been in remission for decades.

Hinckley had to live under a long list of restrictions, which the judge has been loosening over the years. For instance, Hinckley was granted the right to publicly display his artwork and allowed to move out of his mother’s house.

She died in July. He signed a lease on a one-bedroom apartment in the area last year and began living there with his cat, Theo, according to court filings.

In recent years, Hinckley has sold items from a booth at an antique mall that he’s found at estate sales, flea markets and consignment shops. He’s also shared his music on YouTube.

There is no longer a prohibition on him talking to the media. But when Rolling Stone magazine requested an interview with Hinckley to talk about his music, Hinckley declined, according to court filings.

“Despite experiencing some degree of temptation from the lure of an interview with the most hallowed, storied publication of his generation, Mr. Hinckley sought the advice of his treatment team and therapy group before deciding to decline the invitation,” according to a report on Hinckley’s well being that was filed last year with the court. Hinckley referred the request to his attorney.

Hinckley still must give three days’ notice if he wants to travel more than 75 miles (120 kilometers) from home. Perhaps in anticipation of unconditional release, Hinckley even tweeted that he has plans to give a concert in New York City in early July. He sings and plays guitar,

Other restrictions include barring Hinckley from traveling to places where he knows there will be someone protected by the Secret Service. He can’t consume illegal drugs or alcohol. And he can’t contact any of his victims or their families. He also can’t contact the actor Jodie Foster, with whom he was obsessed at the time of the 1981 shooting.

Hinckley’s attorney, Barry Levine, said last year that unconditional release for Hinckley would show that “people who have been ravaged by mental disease, with good support and access to treatment, can actually become productive members of society.”

But the Ronald Reagan Presidential Foundation and Institute said in a statement last year that it was “saddened” by the court’s plan.

“Contrary to the judge’s decision, we believe John Hinckley is still a threat to others and we strongly oppose his release,” the foundation said.