Update: Llama shot by owner in recovery - The Horn News 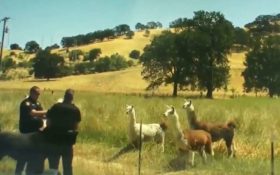 A Louisiana llama named Earl believed to have been shot by his owner last month is now recovering at an animal shelter in St. Landry Parish.

The Daily Advertiser reports Earl takes pain medication and antibiotics each morning mixed with potato chips, but he no longer walks with a limp. However, the bullets remain and pose an ongoing risk of paralysis.

Parish sheriff’s deputies have said Earl was shot by Madeline Bourgeois. Authorities say Bourgeois told deputies the llama attacked her and she escaped to safety, but she returned and repeatedly shot him.

Bourgeois was arrested and charged with animal cruelty.

Shelter executive director Stacey Alleman McKnight says Bourgeois has about two weeks to claim ownership of Earl. The shelter will then look at placing him elsewhere.