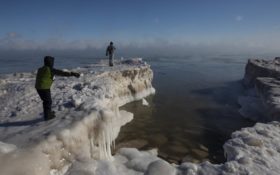 Amid a Polar Vortex locking the Midwest in ice and bracing cold—good news sweeps in. Temperatures are expected to uptick in a plethora of cities that were stuck in subzero double-digits. Some cities expected to warm up are Minneapolis, Chicago, and Rockford, Illinois.

A number of cities noted extremely low temperatures such as: Chicago at minus 23 degrees, Minneapolis at minus 27, Sioux Falls, South Dakota at minus 25 degrees.

The polar vortex has brought wreckage to many public infrastructure throughout the Midwest. It has also claimed at least eight lives.

Various bus routes and train lines have been barren, utility lines such as gas and water have been affected, and electricity has been out in major areas as well.

But the end is finally in sight.

The Latest on a major snowstorm and frigid weather in the Midwest (all times local):

The body of a University of Iowa student has been found on the campus in Iowa City, and officials say they believe his death was weather-related.

Television station KCRG reports that the body of 18-year-old Gerald Belz was found behind an academic hall just before 3 a.m. Wednesday by campus police. He was taken to a hospital, where he died. While officials believe his death was related to dangerously low temperatures at the time he was found, officials have not given a specific cause of death.

Belz’s family told KCRG that doctors did not find alcohol in his system.

The National Weather Service says the wind chill around 3 a.m. was negative 51 degrees.

The death is the eighth fatality linked to the extremely cold weather in the Midwest.

Sub-zero temperatures are the biggest factor in travel to and from Chicago and other hubs in the Midwest.

United Airlines and Southwest Airlines canceled hundreds of Chicago flights before the coldest weather hit. Airlines routinely scrub flights ahead of storms because they know that runway conditions, de-icing of planes and other weather-related chores will cut the number of flights that an airport can handle.

A total of 1,359 flights are cancelled for Thursday, but conditions are expected to improve heading into the weekend.

A northern Indiana sheriff says a zebra has died at a farm due to the extreme cold gripping the region.

Carroll County Sheriff Tobe Leazenby says the zebra was found dead Wednesday morning at a farm outside Delphi, or about 65 miles northwest of Indianapolis. He says a second zebra there survived.

Leazenby says it also has kangaroos, but they’re inside a shelter.

Leazenby says his department is investigating the incident further.

An 82-year-old central Illinois man has died in the cold weather after authorities say he was found several hours after he fell trying to get into his home.

The man’s cause of death was related to cold exposure. He wasn’t immediately identified pending notification of family.

The high temperature in Peoria on Tuesday was 10 according to the National Weather Service. Wednesday temperatures plummeted in central Illinois to double-digit subzero readings amid a cold snap.

The death brings to seven the number of fatalities attributed to the extremely cold weather in the Midwest.

Police say at least two people in the Detroit area have died in the extremely cold weather , including a former member of the City Council in the town of Ecorse, Michigan.

Sassak says police believe the man was disoriented. He was found across the street, near a neighbor’s house.

Ecorse is about 15 miles southwest of Detroit.

In Detroit, a 70-year-old man was found dead in front of a neighbor’s home Wednesday. No names were released.

The deaths bring to at least six the number of fatalities linked to the extremely cold temperatures in the Midwest.

Temperatures in parts of the frigid Midwest are beating even the most frigid areas in the world.

The weather service shows that’s also colder than that the minus 5 degrees (negative 20 Celsius) recorded in Barrow, Alaska, the most northern town in the United States.

And that doesn’t include wind chill, which in northern Illinois made the air feel as cold as negative 57 degrees (negative 49.4 Celsius).

Meteorologists say warmer weather is on the way for the weekend.

More than 1,600 flights have been canceled at Chicago’s airports as double-digit subzero temperatures envelope parts of the Midwest.

About 1,300 of Wednesday’s canceled flights were at O’Hare International Airport, one of the nation’s busiest airports. The temperature at the airport early Wednesday was negative 23 degrees (negative 30.5 Celsius), but wind chills in northern Illinois made it feel as cold as negative 57 degrees (negative 49.4 Celsius).

United Airlines spokesman Charlie Hobart says “everything tends to slow down” during severely cold weather, including manpower, fueling and equipment. Hobart calls the temperatures “dangerous.” He says United is bringing in extra workers to help and has provided heated tents for employees.

Officials have warned against venturing outside amid the dangerously cold weather, which is also affecting train travel in the Chicago area. Amtrak has canceled all trains into and out of Chicago on Wednesday, as well as most services Thursday.

About 4,000 Duke Energy customers were without power Wednesday morning on Indianapolis’ north side and adjacent areas of Hamilton County. The utility is investigating the cause of the outages, which come during the coldest weather in years in much of the Midwest.

The National Weather Service says the temperature fell to minus 11 degrees (negative 23 Celsius) shortly after sunrise Wednesday in Indianapolis, tying the record low for the date set in 1966.

The U.S. Postal Service has suspended mail delivery in parts or all of several Midwest states, including Indiana.

The Minnesota Department of Transportation pulled snowplows off the roads in nearly a dozen southeastern counties because of the extreme cold, while Wisconsin added state offices and agencies to its long list of closures.

Minnesota transportation officials say some snowplows were experiencing mechanical problems because of subzero temperatures Tuesday, so officials decided to idle all plows overnight. Officials say they didn’t want to put drivers in danger if the plows malfunctioned.

In Wisconsin, Gov. Tony Evers issued an executive order closing all non-essential state offices Wednesday, when the wind chill was forecast to be as cold as minus 55 degrees (negative 48 Celsius).

Scores of schools, courthouses and businesses are closed across the Midwest as a deadly arctic deep freeze envelopes the region.

Plummeting temperatures in Chicago are disrupting area transit as officials warn against venturing out into the dangerously cold weather.

The National Weather service says the temperature dropped early Wednesday to minus 19 degrees (negative 28 degrees Celsius). That breaks the previous record low for the day that was set in 1966.

But the weather service says temperatures are expected drop even more as the day progresses.

Extreme weather conditions have prompted Amtrak to cancel all trains into and out of Chicago on Wednesday and most services to or from Chicago on Thursday.

Some major Chicago attractions weren’t opening Wednesday and schools are closed due to the cold.

Among the things the arctic cold is freezing up temporarily in Illinois are the wheels of justice.

Along with numerous schools and businesses, many federal and state courthouses are closed in Illinois on Wednesday as dangerously cold weather hits parts of the Midwest.

Kane County courts are among those closing. The chief judge for the circuit courts in suburban Chicago cited the “dangerous cold” for the decision to close both Wednesday and Thursday.

The chief judge of the Circuit Court of Cook County, home to Chicago, also ordered its courts closed both days. He says he wants to ensure “nobody is placed in danger while traveling to and from court” in “anticipated historic cold temperatures.”

The federal judicial district for northern Illinois is closing its courthouses in Chicago and Rockford on Wednesday.

A deadly arctic deep freeze has enveloped the Midwest, forcing widespread closure of schools, businesses, government offices, and prompting the U.S. Postal Service to take the rare step of suspending mail delivery to a wide swath of the region.

Many normal activities are shutting down and residents are huddled inside as the National Weather Service forecast plunging temperatures from one of the coldest air masses in years. The bitter cold is the result of a split in the polar vortex that allowed temperatures to plunge much further south in North America than normal.

Officials throughout the region are focused on protecting vulnerable people from the cold, including the homeless, seniors and those living in substandard housing.

At least four deaths have been linked to the weather system.