The mysteries of the mummies REVEALED - The Horn News 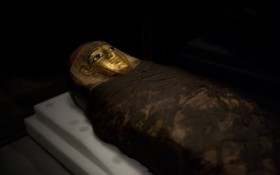 Scientists are using new technology to offer a glimpse of mummies never before seen.  If you’ve ever wondered what’s really underneath that ancient mummy’s elaborate wrapping, there will be a rare chance to find out when “Mummies: New Secrets From the Tombs” opens Sept. 18 at Los Angeles’ Natural History Museum, according to the Associated Press.

Exhibition organizers didn’t actually cut open any of the nearly two dozen specimens from South America and Egypt going on display. (Well, except for one they needed to repair after someone who opened it more than a hundred years ago damaged it significantly. They’ve left it open as an example of how not to handle a mummy.)

They gave each of the others a full-body CT scan to discover just what is under that fancy cloth stitching. What they found, among many other things, were the popular hairstyles of the day, the clothes people who lived a few millennia ago preferred to be buried in and the jewelry they took to their graves with them.

“The latter period is more heavy on the bling,” quipped exhibition curator JP Brown, pulling up images of a couple of 2,000-year-old, gilded, decked-out mummies on his tablet. Museum visitors can do the same on large table-top computers being placed alongside the mummies. They can even manipulate the computer scans so the mummy images appear almost 3-D.

“Look, you can see her curls, you can see her do,” the curator said excitedly as a scan of a 40-something woman from Egypt’s Roman era came to life. Clearly visible under the elaborate headdress her coffin’s top had been molded to match was a mop of short-cropped, curly hair that looked like it might have been just recently styled.

The Gilded Lady, as she’s known, hasn’t been seen in public since the Chicago World’s Fair of 1893. Nor have most of the other mummies that recently accompanied her from Chicago’s Field Museum, where Brown is the conservator.

They’ll be on display in Los Angeles until Jan. 18 before moving on to exhibitions in Denver and other cities and then returning to the Field Museum where they are part of the largest collection of mummies in the United States.

Accompanying them are several animal mummies that were buried with them, including a baboon and a crocodile. There are also pieces of sarcophagus, the large, stone burial tombs they were found in, 3-D molds of their bones, skulls and even toys.

Those scans not only look below the wrappings but even below the mummies’ clothes and skin, revealing that not every mummy from the ancient world led the luxurious life the Gilded Lady had.

One from Peru’s Pacific coast, a woman in her late 20s, appears in her scan to be in her 80s or 90s. She’s lost all but two of her teeth, suffers from painful arthritis of the spine and has hardened arteries.

“This is telling you something about what a toll working in an agrarian society took on you,” said Brown.

It wasn’t easy on children either.

Another mummy is that of a Peruvian infant buried with its mother after both apparently perished during childbirth. Still another is a Peruvian child, about age 2, who was buried with several figurines, including one experts believe was a favorite toy. It resembles a gingerbread man.

From Egypt, there’s a teenage boy named Minirdis, according to the inscription on his coffin, who was believed destined to be a priest like his father before he died 2,500 years ago.

To display all this, the museum has divided its recently renovated ground-floor exhibition space into two tomb-like sections representing ancient Egypt and Peru. That was done to set off both the similarities and differences of the cultures that were a world apart.

In ancient South America, for example, mummification was the standard burial technique, with entire families often laid to rest as one.

Peruvian people of modest means took tools like fishing nets and sewing kits to the grave with them so they could keep toiling in the afterlife. Because it was expected to be hard work, their survivors often brought them large containers of beer. All of that is on display, although the containers are empty.

In Egypt, on the other hand, getting mummified was an expensive deal that only the wealthy could afford. That’s reflected, Brown said, in the elaborate treasures people accumulated throughout their lives just so they could take them to the grave with them.