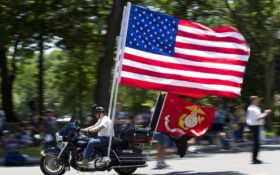 The Biden administration says it may be unsafe for people to gather for the charity event… because it requires gathering at an outdoor parking lot.

Founded in the 1980s, the Rolling Thunder “Rolling to Remember” motorcycle parade had been held annually for the past 30 years by the American Veterans (AMVETS) organization.

Organizers say the parade was a way for veterans and other patriotic Americans to honor combat veterans, especially prisoners of war and those still missing in action.

“We signed basically a blank check that said, ‘I’ll give you up to — and including — my life to defend our Constitution and defend the American freedoms,'” Doc Stewart, AMVETS’ New England chapter leader, told NPR. ” ‘But the return is, you’re going to ensure that I come home afterwards.'”

On March 11, event organizers had been approved for a permit for the hundreds of thousands of motorcyclists to gather in the Pentagon parking lot.

That permit was later revoked by the Biden administration, which said in a statement that “the risk of exposure [from COVID-19] from participants from other communities extends well beyond the National Capital Region.”

“Memorial Day traditions like Rolling to Remember have been granted permits by every administration, Democrat and Republican, for the past 30 years,” Rep. Brian Mast, R-F.L., said in a statement.

Mast lost both of his legs in 2010 while serving in Afghanistan.

“The Biden Administration’s decision to end this Memorial Day tradition flies in the face of the freedoms that so many have died to protect,” Mast’s statement continued. “We are blessed beyond words to be citizens of the greatest country on Earth and only live free thanks to the men and women who made the ultimate sacrifice.”

“Sadly right now, in Joe Biden’s America, it is easier to cross the border illegally than it is to get a permit to pay our respects to our nation’s fallen heroes.”

The group’s national director said the parade will still go on — but organizers have said that the national parade in Washington, D.C. may be called off in the future, citing the rising costs.

Joe Chenelly told Fox News that Rolling Thunder is still “committed to still having a central staging area” in 2021 and that “Plan B” would potentially be announced by the end of the week.