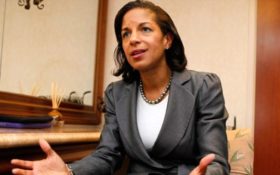 And conservative congressmen think Rice should have to answer.

Calling Rice a “smoking gun” on Twitter, Kentucky Senator Rand Paul argued that she should have to testify before Congress.

“She needs to be asked, ‘Did President Obama ask her to do this? Was this a directive from President Obama? I think she should testify under oath on this,” Paul said.

According to Former U.S. Attorney Joseph diGenova, Rice had ordered spy agencies to create “detailed spreadsheets” of phone calls made by Trump and his aides. These names were then sent to the National Security Council, the Defense Department, and former Director of National Intelligence James Clapper and former CIA Director John Brennan.

The calls allegedly contained activity which legal experts say is legal. Why were the names of individuals engaging in legal conversations being unmasked by the Obama administration? Those names which are incidentally collected are supposed to be masked, or redacted from official reports, legal experts say.

In other words, what the Obama administration was doing was illegal.

The only situation in which these names may legally be revealed is if there is an issue of national security, their personal security, or crime.

“The overheard conversation involved no illegal activity by anybody of the Trump associates, or anyone they were speaking with. In short, the only apparent illegal activity was the unmasking of the people in the phone calls,” diGenova told The Daily Caller News Foundation Investigative Group Monday.

Trump national security aides learned that Rice requested the identities of Trump campaign advisers, according to a U.S. official. Rice would not say whether she had viewed intelligence involving Trump and his aides in an interview on MSNBC, claiming that it is classified information.

Rice also denied that she leaked information to the press, saying “I leaked nothing to nobody.”

But multiple sources and reports say otherwise, and it appears that Rice is just digging herself in a deeper hole, which she is no stranger to.

After all, Rice was wrapped up in the Benghazi controversy as well, appearing on multiple news shows to push the Obama administration’s false claim that the terror attack on the consulate in Libya was triggered by an internet video.

This information comes just about a month after former defense official Evelyn Farkas’ told MSNBC that she was encouraging officials of Obama’s administration to gather as much information and intelligence as possible before Obama left the oval office.