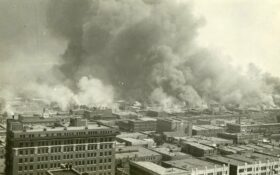 Tulsa will resume test excavations of potential unmarked graves from the 1921 Tulsa Race Massacre after the effort was halted in March because of the coronavirus outbreak, city officials announced.

The pandemic’s travel restrictions have made it difficult for the archaeology team to reach Tulsa’s Oaklawn Cemetery for an examination, which was initially set to begin April 1. The state archaeological survey at the University of Oklahoma includes scientists from out of state.

The test excavation is expected to begin next Monday, Tulsa World reported Tuesday.

Tulsa Mayor G.T. Bynum said his city is committed to the project that’s aimed at identifying potential unmarked graves of the dozens of Black people who were killed by white mobs in Tulsa’s Greenwood district in 1921.

“In the past 99 years, no other agency or government entity has moved this far into an investigation that will seek truth into what happened in Tulsa in 1921,” Bynum said. “As we resume with the test excavation, we’re taking all precautions to do so under the safest environment possible.”

On May 31 and June 1 in 1921, a white mob looted and burned Tulsa’s Black Greenwood district to the ground. The attackers used planes that were used in World War I to drop projectiles to destroy businesses, homes and churches in the historically Black district.

The racist massacre killed up to 300 Black people, and survivors were forced into internment camps overseen by National Guard members.

Now, Tulsa’s mayor said he hopes that finding the graves will bring healing and justice.

Meanwhile, President Donald Trump last month held his first campaign rally at Tulsa’s 19,000-seat BOK Center since the pandemic shut down much of the U.S. by late March. The rally was initially scheduled for Juneteenth, the holiday celebrating the day in 1865 that all enslaved Black people learned they had been freed from bondage. But the rally was pushed to a day later after criticism. The rally’s arena is located less than a mile from the memorials in Greenwood district which became known as Black Wall Street.

The test excavation will help scientists figure out whether human remains are in the area and the nature of the burials. This combined with other data collected at the site will offer scientists information they need regarding how to proceed with the investigation.

City officials predict that the test excavation will take three to six days, with work beginning at 7 a.m. each day and ending at approximately 3 p.m. Public access to Oaklawn Cemetery will be suspended during the test excavation.