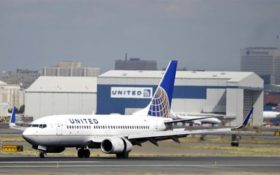 United Airlines says regular-paying flyers are welcome to wear leggings aboard its flights, even though two teenage girls were barred by a gate agent from boarding a flight from Denver to Minneapolis because of their attire.

An airline spokesman said that the girls were traveling Sunday under an employee travel pass that includes a dress code. The move sparked a wave of online criticism against United. Comedian Sarah Silverman tweeted that she would change her United flight bookings to other airlines for a tour next month because of the leggings issue.

Chicago-based United sought to clarify its stance in a post on its website late Sunday titled, “To our customers … your leggings are welcome!”

The post says employees are “regularly reminded” about its dress code.

One of United’s competitors, Delta, had some fun with the controversy Monday, tweeting : “Flying Delta means comfort. (That means you can wear your leggings.)”