UNHINGED! Nancy Pelosi loses it, demands... WHAT!? - The Horn News 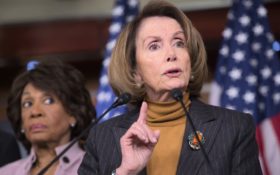 An increasingly desperate Pelosi has asked for help from Trump’s family, asking them to personally force the president to work with Congress — despite ongoing, politically motivated investigations by Democrats intended to harass Trump.

On Wednesday, Trump walked out of a meeting with Democrats that had been set up to talk about how to pay for a $2 trillion package to repair the nation’s roads and bridges.

It has sent Pelosi into a tailspin.

“I wish that his family or his administration or his staff would have an intervention for the good of the country,” Pelosi said to reporters. “Maybe he wants to take a leave of absence?”

Wednesday’s blow-up between Trump and Democratic congressional leaders came because Trump has refused Democrats’ demand for documents and testimony: this following special counsel Robert Mueller’s probe into Russia’s election meddling and contacts with the Trump campaign.

Pelosi did, ahead of a key White House meeting Wednesday. The statement came shortly after Pelosi met with her members in an attempt to tamp down talk of impeachment. Between the caucus gathering and the White House meeting, Pelosi accused Trump of engaging in a “cover-up.”

The Democrats have become known as THE DO NOTHING PARTY!

Pelosi isn’t the only Democrat left in hysterics.

BUSTED! Ocasio-Cortez is screwed after this…