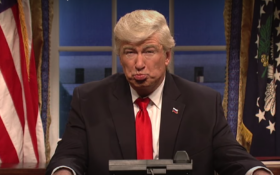 “Saturday Night Live” has just been called out for the biggest sin in comedy.

It’s not for jokes that have gone too far.

No, there’s a much bigger crime, and that’s when your jokes are NOT FUNNY!

It’s supposed to be a humor show, after all, but right now “SNL” is being slammed from both sides for its increasingly humorless portrayal of President Donald Trump by Alec Baldwin.

Critics and alumni of the famed show are taking to the media to condemn the unfunny, anti-Trump propaganda.

“Alec Baldwin is a brilliant actor… he’s not a comedian,” Rob Schneider, who was on the show for four years in the 1990s, told The New York Daily News last month. “I don’t find his impression to be comical.”

He said Baldwin “so clearly hates the man he’s playing.”

“Don’t put Stormy Daniels in there,” he said on Fox Business. “What do I tell my kids?”

Piscopo said he’s a lifelong Democrat – but he supports Trump, and he’s clearly tired of how the president is being portrayed.

Even the media, which normally fawns over “SNL” and Baldwin’s increasingly bitter appearances, is panning the show.

“Your cold opens are terrible, cringeworthy pieces of self-satisfied liberal propaganda that are sometimes so bad they seem like parodies of themselves,” Harry Cheadle, West Coast editor of Vice, wrote in an open letter to the show.

Presidents have always been targets of SNL. That’s what satire is all about, after all.

But it had always hit both sides. And it was usually funny.

“You never knew which way they leaned politically,” Schneider told The Daily News. “You kind of assumed they would lean more left and liberal, but now the cat’s out of the bag and they are completely against Trump, which I think makes it less interesting because you know the direction the piece is going.”

While the show has always leaned left, other Republican presidents have gotten much better treatment.

Will Ferrell portrayed President George W. Bush as a word-mangling dunce, but at the end of the day he was also endearing.

Bush himself even got a kick out of it, joking last year that he should get credit for mangling the words first.

Dana Carvey’s President George H. W. Bush was an out-of-touch elitist, but the overall impression was as gentle as it was funny.

“To me, the genius of Dana Carvey was Dana always had empathy for the people he played,” Schneider said. “Alec Baldwin has nothing but a fuming, seething anger towards the person he plays.”

“We had so many warm moments,” Carvey told Deadline last month. “It was a different time; it wasn’t scorched earth, angry politics.”

He even got an invite to the White House after Bush lost the 1992 election!

And who can forget Phil Hartman’s portrayal of Ronald Reagan. In public, Hartman’s Reagan was slow, soft-spoken, absent-minded and seemingly clueless.

But in front of his aides, he transformed into a multilingual mastermind, running the entire administration himself and leaving everyone else in the dust.

Whether you loved the show or hated it… whether your supported those presidents or not… you’d have to admit the portrayals were done in the best spirit of satire.

The jokes are lazy or nonexistent, in many cases just Alec Baldwin quoting the president but sounding like an idiot – the kind of bullying mimicry used on playgrounds, not the level of humor you’d expect from a show with a national audience.

“You’d think they’ll have to find another approach to Trump eventually,” show alum Norm Macdonald, who portrayed Republican presidential candidate Sen. Bob Dole in the 1990s, told Vulture last year. “I can’t see making jokes with that fever behind them for so long before the whole thing collapses into itself.”