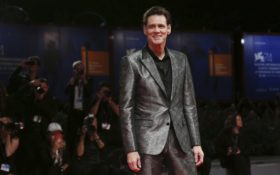 Carrey has recently come under fire for releasing painting depicting President Donald Trump as the Wicked Witch of the West and White House Press Secretary Sarah Huckabee Sanders as an angry monster.

“Don’t worry folks. Melania is fine. They’re probably just reminding her how to play well with others,” the unfunny comedian wrote on Twitter.

Don’t worry folks. Melania is fine. They’re probably just reminding her how to play well with others. pic.twitter.com/qwlyNneX0P

The liberal’s artwork was released only two days after Melania took to Twitter to break the silence over rumors of her absence.

The first lady slammed the media for “working overtime” on speculating over her  whereabouts in the weeks following her kidney operation.

I see the media is working overtime speculating where I am & what I'm doing. Rest assured, I'm here at the @WhiteHouse w my family, feeling great, & working hard on behalf of children & the American people!

The artwork depicting Melania was inspired by the brainwashing process in sci-fi film “A Clockwork Orange.”

If this is supposed to be Melania Trump, you need some more art lessons, Jim [email protected] Carrey. Looks more like Hillary.

Only a weak man goes after a woman, isn't that right, @JimCarrey. You are such the troll….https://t.co/GYOvdoh3pC

@jimcarrey your “drawing” that’s suppose to be @FLOTUS looks more like you you fool!!????consider me one less fan of yours-believe me you are losing many for your political antics!!!

Carrey’s constant trolling of the Trump administration has spurred major backlash for the reject celebrity. The comedian’s acting career has struggled a lot as of lately and his politically motivated artworks have lost the D-list celeb even more fans.

Attacking the first lady as she is in recovery from an operation is despicable and Carrey deserves all of the backlash he is receiving.