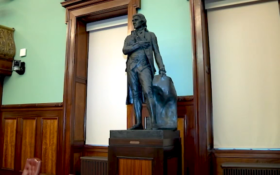 On Monday, an obscure commission in New York’s city government voted to oust a statue of former President Thomas Jefferson.

The commission’s members are appointed by the mayor, not elected. The members voted unanimously after Monday’s Zoom hearing, in lockstep to remove the founding father’s statue because he was a slave owner.

Some called for the statue to be demolished.

New York Assemblyman Charles Barron has become known for his frequent digs against Jefferson, and he testified at the hearing.

“I think it should be put in storage somewhere, destroyed or whatever,” Barron testified. “He was a slave-owning pedophile… who should not be honored with a statue.”

Barron was referring to Jefferson’s sexual relationship with the slave Sally Heming, which began when Jefferson was about 44 and Heming was about 14.

Historians rushed to defend Jefferson as a founding father, the writer of the Declaration of Independence, the third U.S. president, and critically vital historic figure to the United States.

“I think he should stay in the seat of government in a public space,” Lavertue said.

Lavertue described Jefferson as a “flawed” human but acknowledged Jefferson’s very important contributions. “I think Jefferson needs to be grappled with,” he said.

The commission remains divided over where to send the statue. It originally planned to move the statue to the New York Historical Society. However, Commission President Signore Nielsen took issue with the historical society’s admission fee.

“We as a commission will act before the end of 2021 in finding an appropriate location where it remains in the public realm,” Nielsen said at a hearing on Monday. “Public art to me means public, not pay to see.”

Nielsen added, “There are 700 pieces of art under our jurisdiction, we cannot make a rash decision that will set a precedent for the other 699 pieces of artwork that may also have challenges from people or other groups of people.”

At the hearing, some attendees suggested different venues, including the New York Public Library, known for its copy of the Declaration of Independence in Jefferson’s handwriting.

A group of historians suggested moving it from the City Council chamber to the Governor’s Room in City Hall, its original location.

“Locating the statue for viewing in the Governor’s Room, where it was originally placed and apparently stood for much of its history, would be the most reasonable compromise,” the historians wrote, according to The Associated Press.

The piece is a plaster copy of another statue, which currently stands in the U.S. Capitol. The original statue was made in 1833, only seven years after Jefferson’s death.

The statue was gifted to the Capitol by Uriah P. Levy, a Jewish commodore in the Navy who admired Jefferson’s stance on freedom of religion.

I consider Thomas Jefferson to be one of the greatest men in history—author of the Declaration of Independence and an absolute democrat. He serves as an inspiration to millions of Americans.

He did much to mold our Republic in a form in which a man’s religion does not make him ineligible for political or governmental life. A noble man — yet there is no statue to him in the Capitol in Washington.

As a small payment for his determined stand on the side of religious liberty, I am preparing to personally commission a statue of Jefferson.