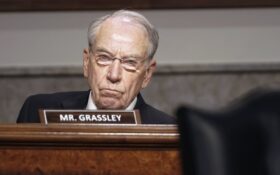 Dave Muhlbauer, an Iowa farmer and a former county supervisor, on Monday became the first Democrat to announce he is running for Republican Sen. Chuck Grassley’s seat.

In a campaign video that shows farm scenes and small towns, Muhlbauer says onetime rural Democrats “just feel like Democrats are leaving rural areas high and dry.” He portrays himself as vested in the future of struggling rural America as a fifth-generation farmer.

“It’s who me and my family are, and that drives me to want to make Iowa the best it can be for everybody,” he says in the video.

Muhlbauer’s candidacy marks a shift in strategy for Democrats, who haven’t won a Senate or governor’s race in Iowa in more than a decade. While Republicans in the state frequently put forth rural candidates, Democrats in recent years have tended to choose people from more urban backgrounds. The move also comes months after Republican Donald Trump carried the onetime presidential battleground of Iowa for a second time by posting larger vote totals and winning margins in the state’s vast rural tracts.

Grassley, a powerful seven-term senator, is 87 and has said he will announce whether he plans to run again by autumn. At 37 and a half century younger, Muhlbauer provides a stark generational contrast, though he has little name recognition statewide.

Muhlbauer, the former vice chair of the Crawford County Board of Supervisors, said in an interview with The Associated Press that bringing more rural Americans back to the Democratic Party will require not just someone who speaks to them, but also someone who can tie economic and environmental policy together with authority.

“Farmers, at the end of the day, watch the bottom dollar,” Muhlbauer said. “When you can create conservation as a commodity, they’ll jump on board because it’s best for them to enhance their farm, and that ripples through rural Iowa.”

Grassley, a longtime farmer, co-owns 750 acres (3 square kilometers) of corn and soybean farmland in northeast Iowa. He has long campaigned as an Iowa farmer.

And yet, as Democrats have tried to connect with rural Iowans, Tom Vilsack was the last rural Democrat elected statewide. In 1998, the then-state senator from Mount Pleasant was elected to his first term as governor. He was reelected four years later.

“Whether it works or not, he’s going to be able to talk about farming in a way that is going to connect with rural Iowa,” John Norris, a former Democratic candidate for governor and rural policy expert, said of Muhlbauer. “You can’t keep doing the same thing over and over again and expect a different result, thinking you’re just going to win it in the suburbs.”

Despite his relative anonymity, Muhlbauer is the scion of a rural Democratic political family — his father and grandfather are former state legislators.

His profile caught the attention of top-shelf national Democratic operatives. The video released Monday was produced by The Win Company, led by Bill Hyers.

Hyers, who has worked for decades with President Joe Biden’s campaign manager Jen O’Malley Dillon, made the memorable fall presidential campaign ad featuring scenes of empty chairs representing Americans who had died from the COVID-19 pandemic.

The Associate Press contributed to this article