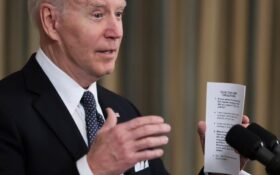 President Joe Biden’s war on fossil fuels has so devastated consumers that some areas of the country are rationing home heating oil to make sure they don’t run out when winter weather turns brutal.

Distributors in the state of Connecticut have begun restricting how much oil people can buy, to make sure the barrels don’t run dry.

“The US Northeast is so short on heating oil that the fuel used to power home furnaces is being rationed even before the start of winter,” reported Bloomberg News, the financial news agency founded by former New York Mayor and 2020 Democratic presidential hopeful Michael Bloomberg.

Rationing takes place in Third World countries, not the United States—at least, not until now. The amount of oil left in the Northeast is only about one-third the level of a typical year.

Thanks to low supplies, wholesalers can only give local distributors a limited amount of fuel. Distributors then restrict how much oil customers can put into their homes, no matter how cold the temperatures get this Thanksgiving.

Those who are able to get their hands on fuel of any kind can plan to spend more on heating than any time in the last 25 years.

Even the Biden administration admits costs will go up — bigly, as his predecessor used to say. Home heating oil costs will rise about 28 percent this year, according to a forecast from the Energy Information Administration released in October. Home heating oil costs rose to $6 a gallon, a $2 increase over last year. Customers who use this form of heating can expect to pay $2,354 this winter.

It’s not just home oil, which only four percent of Americans use; natural gas heat costs will soar 23 percent nationally, the report stated. That comes to $1,094 over the next few months. Propane customers will also pay $1,970 this year.

The lack of fuel shouldn’t come as much of a surprise: Joe Biden ran for president on a platform of eliminating fossil fuels. During a rare trip outside his basement in July 2020, Biden told a group of Green extremist protesters that he was on their side.

But then Biden took office, and the Trump-era boom in gasoline, heating oil, and natural gas turned into the Biden bust.

Voters in deep-blue Connecticut voted for Joe Biden over President Donald Trump by more than 20 percentage points in 2020. In the 2020 campaign, Biden even went so far as to say “we should put (oil executives) in jail” — and he’s hardly backed off his hardcore opposition to the fuel that gets Americans to work.

While campaigning for the 2022 midterms, Biden bragged that, under his administration, “There is no more drilling. I haven’t formed any new drilling.”

But Biden thinks Democrats’ better-than-expected showing in the midterms insulate him from changing course. Biden doubled down when a reporter confronted him with his record of failure.

“75 percent of voters say the country is headed into the wrong direction,” asked Associated Press reporter Zeke Miller. “What in the next two years do you intend to do differently to change people’s opinion of the direction of the country particularly as you contemplate a run for president in 2024?”

“Nothing,” Biden responded. “I’m not going to change direction.”

Unfortunately, the direction he’s taking America is down the tubes.