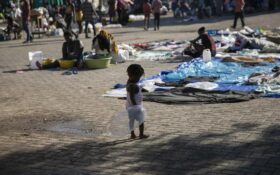 The U.N. Security Council unanimously adopted a resolution Friday demanding an immediate end to violence and criminal activity in Haiti and imposing sanctions on individuals and groups threatening peace and stability in the Western Hemisphere’s poorest nation — starting with a powerful gang leader.

The sanctions were the first authorized by the U.N.’s most powerful body since 2017 and the resolution’s approval by all 15 council nations, whose divisions have been exacerbated by Russia’s invasion of Ukraine, demonstrated a rare sign that council members can work together — at least on some global crises.

“We are sending a clear message to the bad actors that are holding Haiti hostage,” U.S. Ambassador Linda Thomas-Greenfield said after the resolution’s approval. “The international community will not stand idly by while you wreak havoc on the Haitian people.”

Mexico’s U.N. Ambassador Juan Ramon De La Fuente Ramirez praised the council’s unity on a complex issue. “In this crisis, the Security Council has given a clear signal that violence has to stop and it cannot go unpunished.”

The United States and Mexico, which drafted the 10-page resolution, had delayed the vote from Wednesday so they could revise the text to gain more support.

The U.S. ambassador said the resolution was an important first step by the Security Council to help Haitians who want action against criminals, including gangs and their financiers. She said a second resolution, which the U.S. and Mexico are working on, will help restore security and allow the delivery of desperately needed humanitarian aid by authorizing “a non-U.N. International Security Assistance Mission.”

The form of that help might take has been controversial among some council members and Haitians who are wary of foreign military involvement in the country, especially by the United States.

Friday’s text eliminated an earlier reference to an Oct. 7 appeal by Haiti’s Council of Ministers for the urgent dispatch of an international military force to tackle the country’s violence and alleviate its humanitarian crisis. It also dropped mention of an Oct. 8 letter from U.N. Secretary-General Antonio Guterres outlining options to help Haiti’s National Police combat high levels of gang violence.

Thomas-Greenfield said Friday the next resolution will be a response to those requests. She didn’t say when it would be circulated or put to a vote though diplomats said it could happen next week.

The sanctions resolution named only a single Haitian — Jimmy “Barbecue” Cherizier, whose gang has blocked a key fuel terminal, aggravating severe shortages. Cherizier, a former police officer who leads an alliance of gangs known as the G9 Family and Allies, will now face a travel ban, asset freeze and arms embargo.

Political instability has simmered in Haiti since last year’s still-unsolved assassination of President Jovenel Moïse, who had faced protests calling for his resignation over corruption charges and claims that his five-year term had expired. Moïse dissolved Parliament in January 2020 after legislators failed to hold elections in 2019 amid political gridlock.

Haiti already was gripped by price inflation that put food and fuel out of reach for many and by protests have brought society to the breaking point. Violence is raging, making parents afraid to send children to school. Hospitals, banks and grocery stores struggle to stay open. Clean water is scarce and the country faces a cholera outbreak.

“Cherizier and his G9 gang confederation are actively blocking the free movement of fuel from the Varreux fuel terminal — the largest in Haiti,” the resolution said. “His actions have directly contributed to the economic paralysis and humanitarian crisis in Haiti.”

It also said he “has planned, directed, or committed acts that constitute serious human rights abuses.”

While serving in the police, it said, Cherizier planned and participated in a November 2018 attack by an armed gang on the capital’s La Saline neighborhood that killed at least 71 people, destroyed over 400 houses and led to the rapes of at least seven women.

He also led armed groups “in coordinated, brutal attacks in Port-au-Prince neighborhoods throughout 2018 and 2019” and in a five-day attack in multiple neighborhoods in the capital in 2020 in which civilians were killed and houses set on fire, the resolution said.

In a video posted on Facebook last week, Cherizier called on the government to grant him and G9 members amnesty. He said in Creole that Haiti’s economic and social situation was worsening by the day, so “there is no better time than today to dismantle the system.”

He outlined a plan for restoring order in Haiti. It would include creation of a “Council of Sages,” with one representative from each of Haiti’s 10 departments, to govern with an interim president until a presidential election could be held in February 2024. It also calls for restructuring Haiti’s National Police and strengthening the army.

The Security Council resolution establishes a committee that can impose sanctions on other Haitians and groups who threaten peace, security or stability by crimes, violence, arms trafficking, human rights abuses and obstructing aid deliveries.

Haiti’s U.N. Ambassador Antonio Rodrique welcomed the resolution’, saying, “There is no doubt whatsoever that these measures will contribute to bringing an end to the violent and deadly activities of these armed groups marauding in the country and causing numerous victims and mass population displacement.”

But Robert Fatton, a Haitian politics expert at the University of Virginia, said sanctions won’t solve anything and it makes no sense to impose them on Chérizier because he very likely has his cash in Haiti.

“Sanctions have been imposed before, but they don’t have the real threat of military intervention,” he said. “I don’t think it will have any impact.”

Russia’s Deputy U.N. Ambassador Dmitry Polyansky said that despite Moscow’s support for the resolution, “We are not convinced that international restrictive measures will be an appropriate response to the whole raft of complex problems in Haiti.”

He called for a long-term solution through “eradicating poverty and inequality to ensure a strengthening of state institutions in the country, without external dictates.”

Some council members were more hopeful.

China’s deputy U.N. ambassador, Geng Shuang, said “Haiti is at the brink of collapse” and Beijing hopes the resolution will send “a clear signal” to criminal gangs “to stop their evildoing and harming of their people” and to political parties to “immediately stop their collusion with criminal actors” and reach consensus on solving the crisis.

The resolution expresses “grave concern about the extremely high levels of gang violence and other criminal activities, including kidnappings, trafficking in persons and the smuggling of migrants, and homicides, and sexual and gender-based violence including rape and sexual slavery, as well as ongoing impunity for perpetrators, corruption and recruitment of children by gangs and the implications of Haiti’s situation for the region.”

It demands “an immediate cessation of violence, criminal activities, and human rights abuses, which undermine the peace, stability and security of Haiti and the region.”

And it urges “all political actors” to reach agreement on allowing legislative and presidential elections to be held “as soon as the local security situation permits.”