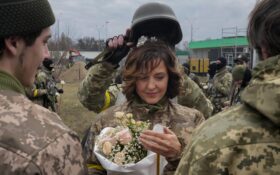 It’s a global day to celebrate women, but many of those fleeing Ukraine feel only the stress of finding a new life for their children as husbands, brothers, and fathers stay behind to defend their country from Russia’s invasion.

The number of refugees reached 2 million on Tuesday, according to the United Nations, the fastest exodus Europe has seen since World War II. One million of them are children, UNICEF spokesman James Elder tweeted, calling it “a dark historical first.”

While most Ukrainian women are fleeing the bloody Russian advance, a few have vowed to stay and fight with the men —

Wow. This sounds more terrifying than the men
pic.twitter.com/4113GMpQFJ

They are the exception. Polina Shulga told the Associated Press that she has tried to ease her transition into a refugee by hiding some truths from her 3-year-old daughter.

“Of course it’s hard to travel with a child, but I explained to her that we’re going on vacation and that we’ll definitely come home one day when the war is over,” Shulga said.

She didn’t know what would come next after arriving in Hungary from Ukraine’s capital, Kyiv, but believed the experience would make her stronger. “I feel like I’m responsible for my child, so it was easier for me to take this step and leave,” she said, as her little girl tugged at the hem of her coat.

Nataliya Grigoriyovna Levchinka, from Donetsk in eastern Ukraine, felt much the same.

“I’m generally in some kind of a terrible dream which keeps going on,” the retired teacher said. “I would be in some kind of abstraction if it wasn’t for my daughter. I wouldn’t be able to come to my senses.”

A decree by Ukraine’s government that prohibits men aged 18 to 60 from leaving the country means that most of those fleeing are women and children, though the U.N. doesn’t have exact numbers on gender. Ukraine’s policy is meant to encourage men to sign up to fight against Russia’s invasion or to keep them available for military conscription.

That has led to heartbreaking scenes of separation, along with growing worry as some encircled, battered parts of Ukraine slip out of reach.

Ukrainian President Volodymyr Zelenskyy spoke of International Women’s Day in a video address: “Ukrainians, we usually celebrate this holiday, the holiday of spring. We congratulate our women, our daughters, wives, mothers. Usually. But not today. Today I cannot say the traditional words. I just can’t congratulate you. I can’t, when there are so many deaths. When there is so much grief, when there is so much suffering. When the war continues.”

Women normally receive flowers and chocolates and kisses and speeches. But this time, sugary messages were tinged with sorrow or pleas for peace.

In a refugee camp in Moldova, Elena Shapoval apologized for her tears. She doesn’t hide them from her two children, one 4 and one 8, while recalling their journey from Odesa. The younger one doesn’t understand what’s happening, Shapoval said. The older one tries to calm her, saying, ‘Mom, everything will be all right.’”

She cannot collapse as she thinks about the life they left behind. “I realize that we’ll have to work a lot now,” she said. “I need to get myself together because I have two children and I need to ball up my will like a fist.”

In Romania, Alina Rudakova began to cry as she realized she had forgotten about the holiday. Last year, the 19-year-old from Melitopol received a bouquet of flowers from her father and gifts from other relatives.

“This year, I didn’t even think about this day,” she said. “This day was really awful.”

But some arriving refugees were gifted flowers just after crossing the border. “I was so stressed, I was so tired, it kind of made my day,” said 15-year-old Mariia Kotelnytska from Poltava.

“The best present for every woman will be to stop the war,” said 19-year-old Anastasia Kvirikashvili from Vinnytsia.

As the refugees continued to arrive, new fragilities emerged. “The people who are coming now have less means than the people who came initially, and they’ve also experienced more likely conflict directly, so they’re probably more traumatized,” said a spokesman for the U.N. refugee agency, Matthew Saltmarsh.

In a theater at the Ukrainian Cultural Center in the Polish city of Przemysl near the border, women and children filled makeshift beds. Some checked their phones yet again for news.

“It was difficult to prepare myself for traveling,” said one refugee from near Kyiv who gave only her first name, Natalia. “My sister said that I am very brave, but in my opinion I am a coward. I want to go home.”

And at the Medyka border crossing in Poland, Yelena Makarova said her hurried flight from Kremenchuk with her mother and teenage daughter marked the end of her life as she knew it. Her father, husband, and brother all stayed behind.

“I wish that (the war) it would finish as soon as possible, because do you know, for every mother, what can be worse?” she said. “I can’t understand why our children are dying. I don’t know.”