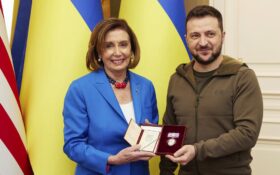 Ukrainian President Volodymyr Zelenskyy’s dismissal of senior officials is casting an inconvenient light on an issue that the Biden administration has largely ignored since the outbreak of war with Russia: Ukraine’s history of rampant corruption and shaky governance.

As it presses ahead with providing tens of billions of U.S. tax dollars in military, economic, and direct financial support aid to Ukraine and encourages its allies to do the same, the Biden administration is now once again grappling with longstanding worries about Ukraine’s suitability as a recipient of massive infusions of American aid.

Those issues, which date back decades and were not an insignificant part of former President Donald Trump’s first impeachment, had been largely pushed to the back burner in the immediate run-up to Russia’s invasion and during the first months of the conflict as the U.S. and its partners rallied to Ukraine’s defense.

But Zelenskyy’s weekend firings of his top prosecutor, intelligence chief and other senior officials have resurfaced those concerns and may have inadvertently given fresh attention to allegations of high-level corruption in Kyiv made by one outspoken U.S. lawmaker.

It’s a delicate issue for the Biden administration. With billions in aid flowing to Ukraine, the White House continues to make the case for supporting Zelenskyy’s government to an American public increasingly focused on domestic issues like high gas prices and inflation. High-profile supporters of Ukraine in both parties also want to avoid a backlash that could make it more difficult to pass future aid packages.

U.S. officials are quick to say that Zelenskyy is well within his right to appoint whomever he wants to senior positions, including the prosecutor general, and remove anyone who he sees as collaborating with Russia.

Yet even as Russian troops were massing near the Ukrainian border last fall, the Biden administration was pushing Zelenskyy to do more to act on corruption — a perennial U.S. demand going back to Ukraine’s early days of independence.

“In all of our relationships, and including in this relationship, we invest not in personalities; we invest in institutions, and, of course, President Zelenskyy has spoken to his rationale for making these personnel shifts,” State Department spokesman Ned Price told reporters on Monday.

Price declined to comment further on Zelenskyy’s reasoning for the dismissals or address the specifics but said there was no question that Russia has been trying to interfere in Ukraine.

Still, in October and then again in December 2021, as the U.S. and others were warning of the increasing potential for a Russian invasion, the Biden administration was calling out Zelenskyy’s government for inaction on corruption that had little or nothing to do with Russia.

“The EU and the US are greatly disappointed by unexplained and unjustifiable delays in the selection of the Head of the Specialized Anti-Corruption Prosecutor Office, a crucial body in the fight against high-level corruption,” the U.S. Embassy in Kyiv said on Oct. 9.

“We urge the selection commission to resume its work without further delays. Failure to move forward in the selection process undermines the work of anti-corruption agencies, established by Ukraine and its international partners,” it said. That special prosecutor was finally chosen in late December but was never actually appointed to the position. Although there are indications the appointment will happen soon, the dismissal of the prosecutor general could complicate the matter.

The administration and high-profile lawmakers have avoided public criticism of Ukraine since Russia invaded in February. The U.S. has ramped up the weapons and intelligence it’s providing to Ukraine despite early concerns about Russia’s penetration of the Ukrainian government and existing concerns about corruption.

A Ukrainian-born congresswoman who came to prominence early in the war recently broke that unofficial silence.

Rep. Victoria Spartz, a first-term Republican from Indiana, has made half a dozen visits to Ukraine since the war began. And she was invited to the White House in May and received a pen used by President Joe Biden to sign an aid package for Ukraine even after she angrily criticized Biden for not doing more to help.

But in recent weeks, Spartz has accused Zelenskyy of “playing politics” and alleged his top aide Andriy Yermak had sabotaged Ukraine’s defense against Russia.

She’s also repeatedly called on Ukraine to name the anti-corruption prosecutor, blaming Yermak for the delay.

Ukrainian officials have hit back. A statement from Ukraine’s Foreign Ministry accused Spartz of spreading “Russian propaganda” and warned her to “stop trying to earn extra political capital on baseless speculation.”

U.S. officials gave Spartz a two-hour classified briefing on Friday in hopes of addressing her concerns and encouraging her to limit her public criticism. She declined to discuss the briefing afterward but told The Associated Press that “healthy dialogue and deliberation is good for Congress.”

“We’re not here to please people,” she said. “It’s good to deliberate.”

Hours later, Spartz gave a Ukrainian-language interview broadcast on YouTube in which she called again for the appointment of an independent prosecutor.

“This issue should be resolved as soon as possible,” she said in the interview. “This is a huge problem for the West, so I think your president should address this issue soon.”

Rep. Jason Crow, a Colorado Democrat who sits on the House Armed Services and Intelligence committees, said he had seen no evidence to support allegations that Zelenskyy’s inner circle was trying to help Russia. But as the war continues, part of the long-term American strategy in Ukraine will have to include addressing waste and mismanagement of resources, he said.

“There is no war in the history of the world that is immune from corruption and people trying to take advantage of it,” Crow said. “If there are concerns raised, we will address them.”

Igor Novikov, a Kyiv-based former adviser to Zelenskyy, called many of Spartz’s claims a mix of “hearsay and urban legends and myths.” Allegations against Yermak in particular have circulated for years going back to his interactions with Trump allies who sought derogatory information against Biden’s son Hunter.

“Given that we’re in a state of war, we need to give President Zelenskyy and his team the benefit of the doubt,” Novikov said. “Until we win this war, we have to trust the president who stayed and fought with the people.”