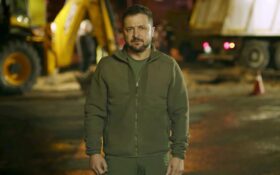 A collection of wartime speeches by Volodymyr Zelenskyy, featuring an introduction written by the Ukrainian president, will be published Dec. 6.

Crown, a Penguin Random House division, announced Monday that the book will be called “A Message from Ukraine” and will also include a preface by Arkady Ostrovsky, the Economist’s editor for Russia and Eastern Europe.

“Supporting Ukraine is not a trend, a meme or a viral challenge,” Zelenskyy said in a statement released by Crown. “It is not a force to rapidly spread across the planet and then just as rapidly disappear. If you want to understand who we are, where we are from, what we want and where we are going, you need to learn more about who we are. This book will help you do just that.”

The proceeds will go to United24, the initiative Zelenskyy launched to coordinate charitable donations to Ukraine. Zelenskyy added that he has chosen 16 speeches that he hopes will help readers “understand Ukrainians: our aspirations, our principles, and our values.”

The former actor and comedian was elected in 2019.

He found himself suddenly transformed into a wartime leader after Russia’s invasion in February, with his impassioned and defiant stance bringing comparisons to Winston Churchill among others.