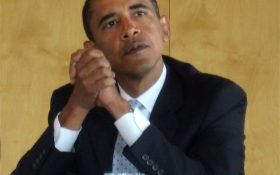 The House Speaker Nancy Pelosi, D-Calif. and the Democrats’ impeachment push against President Donald Trump started in Ukraine years ago.

It wasn’t the phone call between Trump and Ukrainian President Volodymyr Zelensky that set the Democrats impeachment efforts into motion.

That was only the final step. This Ukrainian nonsense has been going on behind-the-scenes for years.

In fact, the Democrats dirty dealings with Ukraine and Trump go back all the way to former President Barack Obama and his administration. Former Vice President Joe Biden’s quid-pro-quo removal of the top Ukrainian prosecutor that was investigating his son in 2014 was just the beginning.

That dossier was used later to get legal approval for the wiretap and spying efforts against the Trump presidential campaign.

Brennan used a fake passport and phony name at the time so his travel to Ukraine wouldn’t be noticed.

“Ukrainian government officials tried to help Hillary Clinton and undermine Trump by publicly questioning his fitness for office,” a Politico investigation found in 2017. “They also disseminated documents implicating a top Trump aide in corruption and suggested they were investigating the matter, only to back away after the election. And they helped Clinton’s allies research damaging information on Trump and his advisers.”

“A Ukrainian-American operative who was consulting for the Democratic National Committee met with top officials in the Ukrainian Embassy in Washington in an effort to expose ties between Trump, top campaign aide Paul Manafort and Russia, according to people with direct knowledge of the situation,” Politico reported.

And these Ukrainian-Obama efforts did impact the presidential race. Manafort later resigned, and the conspiracy theory that Trump was colluding with Russia was born.

During his exhaustive investigation, Mueller uncovered dirty tax dealings and a ring of Russian spies. But he finally concluded earlier this year that there was insufficient evidence of collusion.

Even House Intelligence Committee Chairman Adam Schiff was eager to use foreign intelligence against Trump — so much so that he was asked the fake Ukrainian parliamentary chairman for it on-air during an 8-minute prank phone call.

The Democrats have been trying to impeach Trump before the president was even elected.

The Obama administration were actively using foreign intelligence to conduct wiretaps on the Trump presidential campaign and launch a special counsel investigation.

Democratic leadership was so desperate, they even asked Russian radio pranksters for nude photos of the president.

Now, these same Democrats are moving to impeach the president because of a phone call… because Trump asked about a Ukrainian criminal investigation that same administration demanded be buried in 2014.

The corruption pieces are all adding up — but it’s not Trump that needs to be worried.

In the end, the Ukrainian scandal all points straight back to Obama.