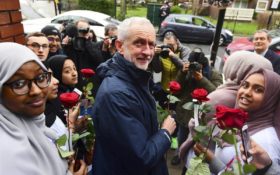 British police have charged a man after opposition leader Jeremy Corbyn was hit by an egg.

Labour Party leader Jeremy Corbyn was assaulted while visiting a mosque in his London constituency on Sunday. A man was arrested at the scene after allegedly smacking the egg onto the left-wing politician’s head while shouting “When you vote you get what you vote for.”

The Metropolitan Police force said Monday that 31-year-old John Murphy was charged with assault by beating. He is due to appear in court Tuesday.

Britain’s divisive decision to leave the European Union has raised the temperature in politics, with lawmakers complaining of an increasing level of abuse and threats.

In 2016, Labour lawmaker Jo Cox was stabbed and shot to death by an attacker shouting far-right slogans.