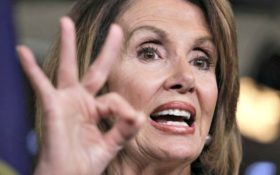 House Speaker Nancy Pelosi and her Democratic Party hopefuls might be in big money trouble, according to financial disclosures released publicly on Monday.

The talk and campaign e-mail buzz is over. The cold, hard numbers have come out—and they could just drive half-a-dozen or more candidates out of the race in the next few days.

Pelosi has been leading the Democrats on an anti-Trump campaign for years.

Come 2020 election time, the Democratic Party might be too broke to put up a decent fight.

As a matter of fact, more than half of their “field of dreams” actually went into the hole.

No less than 11 of the Democrats’ presidential hopefuls spent more money than they earned in the last three months of this year, according to the documents.

Five of the Democrats’ nearly two dozen candidates accounted for nearly all the contributions—about $100 million altogether.

On the other hand, several candidates who had been built up by the media—including Beto O’Rourke, Senator Cory Booker,  and Washington Governor Jay Inslee—all drowned their campaigns in red ink during the second quarter.

They run their campaigns at a deficit—imagine what they’d do to the $22.5 trillion national debt!

Money doesn’t matter if you’re as popular as President Donald Trump. He can put tens of thousands of people into a stadium any time he zips out on Air Force One.

Most of the parade of anonymous Democrats have no real popularity base — and the numbers show they have little financial support, either.

If they don’t get their hands on some money quickly, their campaigns will have to fold up, insiders say.

A former Biden speechwriter who switched to Sen. Kamala Harris’ campaign, Matt Littman, laid it all on the line.

“Some of these candidates need a miracle,” he said.

Maybe they could pass a law that would take the top five candidates’ campaign donations and distribute them evenly to all the hopefuls?

As bad as that news is, it actually gets worse for the Democratic 2020 hopefuls: The candidates who look “strong” on paper are actually squeezing a tiny core of megadonors until their checking accounts are as dry as a stone.

Joe Biden is the best example. He had to have top donors fill in the enthusiasm gap that his gaffes and misstatements have left behind him.

Biden raked in $22 million this quarter—but he had to lean on top donors, big time.

He hopped on a jet from one of his three mansions to their mansions, to collect checks for the maximum possible donation—$2,800 apiece.

That’s great for Joe… for now.

But that also means he can’t get any more money from them during the primaries—they’re all tapped out.

Joe’s so unpopular with his own party’s voters that almost $400,000 of that take has come from a single law firm: Morgan & Morgan, based in Florida.

Meanwhile, Bernie Sanders and Elizabeth Warren raised about half as much money—about $12.5 million each—but mostly from donors giving $200 or less.

That means they can raise that money over and over again.

But there’s a huge elephant in the room. A Republican elephant.

When a billionaire raises big money, you know he’s got the support of the people!

That money is being shared with the Republican National Committee for races across the nation…and that doesn’t count the reported $123 million that Trump already had on hand!

And unlike the Democrats, Trump is bringing his party together.

“Enthusiasm for this President continues to grow,” said RNC chairwoman Ronna McDaniel. “President Trump and Republicans up and down the ballot are in a strong position to win heading into 2020.”

The Trump campaign has already got campaign teams digging into swing states, registering new Republican voters, and setting his plan into motion to win in 2020.

Meanwhile, the Democrats are tearing each other apart over who’s more “woke.”

It’s going to be a long campaign season for Pelosi and her Democrats.